London, UK- The Ethiopian Embassy in collaboration with Pace Group hosted a business roundtable on investment Â opportunities in Ethiopia. The event brought together UK companies working in Ethiopia and potential investors to discuss the enabling investment environment in Ethiopia, which has become one of the emerging investment destinations in Africa.

H.E. Greg Dorey, the British Ambassador to Ethiopia, in remarks at the event highlighted the long-standing and rich bilateral ties between Great Britain and Ethiopia. Over the years, there has been growing involvement of UK businesses in Ethiopia, particularly in construction, energy, clothing, beverages, and leather industries. The UK is well positioned to be engaged with the Ethiopian market economy, he said.

Ambassador Dorey noted that Ethiopiaâ€™s economic potential is enormous, with a healthy, impressive and consistent growth. Businesses with long-term vision can now look at Ethiopia, with its one-stop shop for investment, availability of opportunity for engagement and low corruption.

The British Embassy in Addis Ababa has been instrumental in encouraging and supporting British investors interested to invest and engage in the development endeavours of Ethiopia.

UK companies such as Pittards, JCB, Nyota Minerals, DIAGEO, Tesco, among others, operate in Ethiopia creating new jobs and contributing to the growth achieved in the various sectors of the economy. New companies are also showing interest in investing in Ethiopia including Unilever and GlaxoSmithKline.

In a presentation at the event, H.E. Berhanu Kebede, Ethiopian Ambassador to the UK, urged businesses to invest in Ethiopia, where the environment is conducive with a big market and abundant labour force, affordable and employable in the different economic sectors.

The Ambassador elaborated on investment opportunities and incentives available forÂ potential investors in Ethiopia and underlined the fact that the UK is one of the major development partners of Ethiopia. Ethiopia, aspiring to join the middle income countries by 2025, has beenÂ implementing the Growth and Transformation Plan that embraces mega projects including the GrandÂ Ethiopian Renaissance Dam, railway networks, telecoms and massive infrastructure development.

Committed to equitable growth through pro-poor strategies and policies, Ethiopia has registered anÂ annual growth rate of 10% over the past decade. It has created three million new jobs in four years inÂ urban areas.’

Tariq Mohammed, Project Director at Pace Group, thanked the Ambassador Berhanu for hosting theÂ event and saying he has seen significant changes in Ethiopia in terms of infrastructure and investment.

A film produced by the British Embassy titled â€œDoing Business in Ethiopiaâ€, was also screened at theÂ event depicting the activities of some of the British companies already in Ethiopia. The filmâ€™s overallÂ message was that the Ethiopia we see today is different from the 1980s, with recent improvements inÂ the physical infrastructure and human capital, coupled with political stability, making Ethiopia anÂ attractive destination for investment.

Ethiopiaâ€™s economy, now the fifth largest in Africa, is one of the ten fast growing economies in theÂ world. 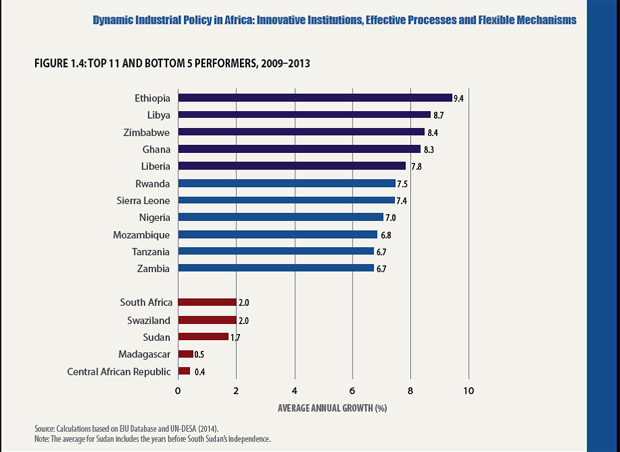 The 2014 Economic Report on Africa report by UNECA released earlier this week said that EthiopiaÂ recorded the fastest growth in Africa over the period 2009-2013, with an average of 9.4% per year,Â owing to â€œexpansion in services and construction, aggressive public spending on infrastructure andÂ public services, and increasing agricultural production associated with rising domestic demand.â€Â â€œThanks to its Growth and Transformation Plan 2010/11â€“2014/15â€”focused on well-articulated,Â designed and implemented economic policies for agriculture-led industrializationâ€”Ethiopia isÂ successfully developing, with sustained two-digit growth rates and greater investment in agricultureÂ and industry.â€

It is also to be noted that Ethiopia recently received its first ever credit rating from the three top globalÂ rating agencies, Fitch, Standard and Poorâ€™s and Moodyâ€™s, opening doors for the Ethiopian governmentÂ to diversify its sources of finance and highlight the countryâ€™s overall transformation aided by a double digitÂ economic growth over the past decade. The ratings, all stable (B and B+), also paves the way forÂ the government to issue international bonds and also attract more flow of foreign direct investmentÂ into Ethiopia.

Ethiopia is, indeed, open for business!