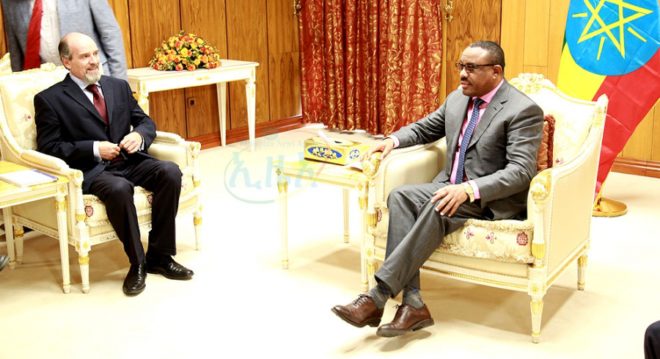 Josef I. Abramowitz, CEO of the company announced the plan following discussions with Prime Minister Hailemariam Desalegn alongside with the Israeli companies.

The company which is interested to invest in solar and wind power has planned to work with 10 Ethiopian universities.

According to him, the project has targeted training hundreds of thousands of engineers in addition to improving power supply.

The company has already concluded agreement with three universities – Debretabor, Jigjiga and Mekele – for the training of the engineers and consultation is going on with the other universities to reach similar stages, the CEO added.

Raphael Morav, Ambassador of Israel to Ethiopia noted that the companies came to Ethiopia as “they believe very much in the opportunities that are here and they came here for a long term investment.”

He added “However there are also some challenges in the activities here so we thought it was important to raise the issues with the Prime Minister and I have to say that we had a very frank and direct conversation. The Prime Minster gave answers to all the questions and the issues that was raised and I think and that would give a good way to go ahead.”

The Ambassador said “We would like to translate the excellent political relations that exist between the two countries into economic benefits for both countries.”

GIGAWATT GLOBAL is among the 10 companies that discuss with the Prime Minister on business opportunities and investment atmosphere.

Energy development, human resource development, education, potable water and agriculture are among the areas that the companies are interested to be engaged.