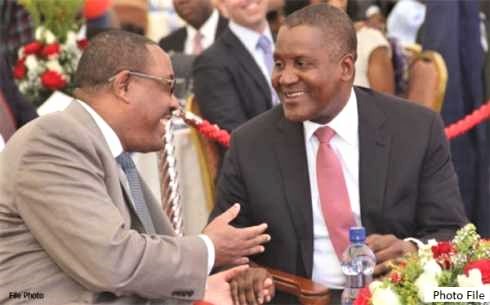 The Ethiopian Premier and Dangote discussed ways to increase the group’s investment in Ethiopia.

During the talks, PM Hailemariam confirmed Ethiopia’s commitment to provide the necessary support for investment, according to Zadig Abreha, media and public relations deliverology minister of the Prime Minister.

Media had been reporting that Dangote could quit its investment in Ethiopia due to the instability occurred in some places, however, the group’s current expansion activities invalidate all the reports, he said.

Stating that he had investmented more in Ethiopia than any other African country, Dangote said he wants to double his investment in the cement sector in the future.

He further told the Premier that the group has a plan to build a cement-bag manufacturing plant.

“We are not a one-time investors,” he said, adding “we will ensure mutual benefit by facing together the challenges in the country.”

Africa’s richest man and Nigerian business tycoon also commended the government of Ethiopia in its efforts to find solutions for problems that occur in some places.

According to ENA, Dangote’s investment in Ethiopia currently hit 600 million US dollars.

He opened a cement plant in Ethiopia in 2015 at a cost of 480 million US dollars at Mugher, about 85km away from Addis Ababa.

The factory has a production capacity of 2.5 million tonnes of cement per annum.

Ethiopia is the most profitable market for Dangote cement. It sold 1.7 million tonnes in the first nine months of 2017.