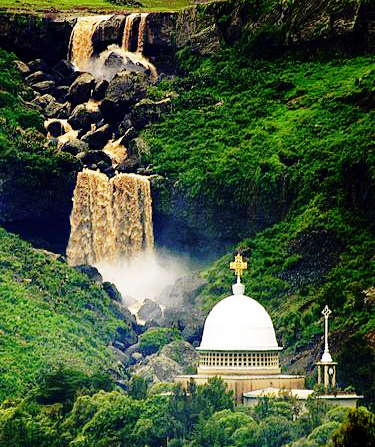 In a dark, sooty room lit with a blaze emanating from a handful of traditional ovens, men stir dough and bake in absolute silence. While some keep the fire burning by inserting chopped woods into the oven, others pile the dough on to the clay oven. Undeterred by the harsh working environment that takes after a forced labor camp, the men residing in Debre Libanos, a monastery lying some 100km northwest of the capital, look pretty dedicated to leading this monastic life. Many of these men claim that they were healed from their physical and mental illnesses after coming to Debre Libanos.

Religious scholars of the Ethiopian Orthodox Church assert that this monastery has miraculous healing powers thanks to the divine promise made to Abune Teklehaimanot, an acclaimed religious leader and saint who lived between the 13th and 14th centuries. Tegbar bet (house of faction), where men who have given their life to spiritual life become industrious, is an integral part of monasteries in Ethiopia. “There is no other place that can offer me lasting peace and eternal life,” Gebre Tsadik, one of those young men serving in Tegbar bet, told this reporter. In spite of the hellish aspect of the room, where suffocation and warmth taunts the men on their duties, the men who seek the miraculous healing power usually sit by the side of the oven bathing in the smoke and the heat radiating from the ovens. The major duty at the Tegbar bet is preparing the meal for monks and people serving the monastery. Every monk visits it (Tegbar bet) once in a day to get their dinner known as Dabe (flat bread made of teff) and boiled grains. The crop is grown in the backyards of the monastery, and with the help of the flour mill, also owned by the monastery, the men in Tegbar bet receive fresh supply of flour promptly. Usually, the men wake up at 2am and go through shifts all day long. Debre Libanos, one of the oldest monasteries in the country, is among the few sacred places that still embodies the authenticity of the ancient Ethiopian Orthodox Church. Founded some eight hundred years ago, it has always been a busy destination for religious pilgrims flocking to the country. Many Christians believe in the blessing they can receive via the holy Ethiopian intercessor, Abune Teklehimanot, who taught the gospel almost all over the country until his righteous death at the age of 100. He lived there for some twenty-two years praying and fasting for the health of his fellow people and beloved land in a cave at the foot of a hill, according to his historical accounts. The last seven years saw his incredible spiritual endurance, religious historians claim, as he stood with his single leg to receive a divine promise from God to the effect that anyone buried where he (Abune Teklehimanot) stood will face final judgement.

The promise that is believed to have been too crucial for any Christian is the promise of eternity; and many seek to be buried in the place where he led an absolute holy life. And this has become a reputation for the place to be attracting many Orthodox Christians to be buried there. “According to the Holy Bible, saints have a memorial oath that will save their followers, and it is these Abune Teklehimanot’s apostolic deeds which made him a saint and his monastery a sacred place,” Tsebatie Woldemariam, head priest of the monastery, says. Tens of thousands of bodies were interred there. Patriarchs and bishops, leaders and their royal families, patriots and scholars were among those laid to rest on the sacred ground. Despite the availability of other sacred places around the city many still look for the monastery as their final place of eternal rest. Moreover, many families have already secured their future burial sites around the monastery. The old monastery, surrounded by a massif of hills in the plateau of the northern highlands, looks pretty vast consisting of caves for monks and nuns, place of worship, cemeteries and archives. Debre Libanos has a community of 3000 souls, of which some 800 are monks and nuns living in the area. The large traffic of domestic religious pilgrims has also attracted hundreds of beggars, who, according to some, lead a very lucrative begging career. As a result, they are pretty unwilling to leave it and live in a shelter for the needy. “Some had an opportunity to stay in a shelter that offers better facilities, but refused to budge,” Wolete Mariyam, a nun told this reporter. “Now, it is becoming something of a problem to the great monastery,” she adds. 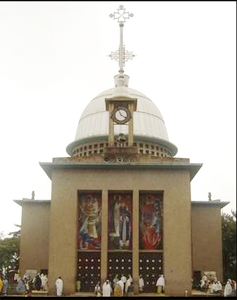 In fact, many of those beggars living there have no families and totally rely on begging. While some of them live there, having been healed from their illnesses, others arrive there due to spiritual guidance and choosing a life of celibacy. A 75-year-old man, Aba Bihonegn, arrived there twenty years ago in search of recovery from his illness. Having received the healing there, he changed his mind about what his life’s direction should be. Twenty years is his choice that saved his life, he says; now he is the only one walking among his five siblings. “All were healthy and well-to-do, except me. Now, they have all gone and I am the only one who survived to visit our relatives,” he says. He traveled to his province, Mota, Gojjam, twice to visit his children and relatives. Nevertheless, he didn’t accept their request for rejoining the family. “I have nothing here; and I hardly find food here but I live as someone who is rich. I will die here,” he adds. The condition of begging seems to be getting worse by the day.

Recently, the monastery called upon the relatives of those buried there to relocate the bodies as it is keen to carry out some development activities. Despite the enormity of the land possessed by the monastery, there is a serious concern of land scarcity, according to the head priest. “When we look at the rate of the funeral services given here, we need to be careful not to face shortage of space,” he says. There are at least four or five burials a day in the monastery, and most are with a tomb that requires a significant portion of a plot of land. Four years back, the monastery built a columbarium and offered to people to set their burial place in advance; it attracted many at the time. It also boosted the monastery’s financial capacity by earning some 20,000 birr for each body placed inside the columbarium. “We should do more columbariums that we don’t want to destroy the precious indigenous plants while digging graves,” he reiterates. The monastery used to access financial support from royal families during the imperial era. Now, funds are not easy to come by and hence it is obliged to support itself. Although it enjoys the alms and aids from visitors, it aims to create its own financial source, especially from the burial service. The archive built in 2010 inside the church has also become a source of income for the monks. It charges 10 birr per person to enter and take a look at the various religious and national treasures kept there for centuries. Ceremonial vestments worn by kings and bishops, crowns, ancient manuscripts, traditional weapons and artifacts have been preserved since the 14 th century. Silver crowns of Emperor Menelik and his wife Tayitu, royal-seats of His Majesty Haile-Selassie I and former patriarchs, and other articles that are hardly found elsewhere are also kept there. Bililign Molla travels there twice a week to build a tomb to his beloved mother. He has invested some 50,000 birr so far, and it is currently on course for completion. “It has something essential, and I have to do it for the sake of getting a blessing from the whole family,” he says. He also thinks that he is lucky to secure a burial spot there for his family. He also predicts that the opportunity gets narrower with the march of time. Even if he feels that it’s hard to believe that there surely is an eternal life awaiting man after death if buried there, his faith persuades him to do so. He even wants to have bodies of his future children beside him when dies. However, he fears that his mother’s tomb built with marble and metal bars may face the danger of being demolished through time as the demand for burial space rises. 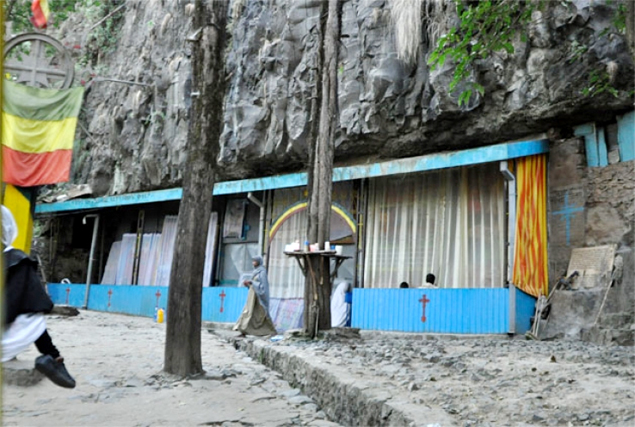 Ironically, the tourism potential that the monastery possesses may risk the sanctity of monastery, some fear. They argue that tourists flocking to the monastery may bring strange practices to the sacred and secluded monastery. While many insist on the possible tourism potential from which both the monastery and the country could benefit, some remain defiant that it shouldn’t happen for it is such a spiritually important place. Citing some of the practices that violate the rituals in some places such as Lalibela and Axum caused by over-commercialization, they warn the Church not to expose itself to danger. “These places should be safeguarded from some bad habits that are being exhibited in some places like Lalibela. They must have a special way of reception for tourists,” Joelle Cohev Finkelistein, an Israeli tourist, and former employee of the Culture and Heritage ministry of Israel, says. In an attempt to put some of the similarities that Ethiopia and Israel have in sacred places, she recommends that the people should be involved in discussing the fate of these places.

Perhaps because the country has immense religious and national treasures it would achieve its decisive development that will ease its dire poverty, but respecting and preserving the dignity of its treasures should never be questioned, commentators opine. On the other hand, its monasteries should always be a source of wisdom, blessing, and a cradle of history beyond their presence as a heritage. And Debre Libanos may demonstrate these values as an old and reputable monastery that has witnessed sanctity, wisdom and spiritual ecstasy over a generation.