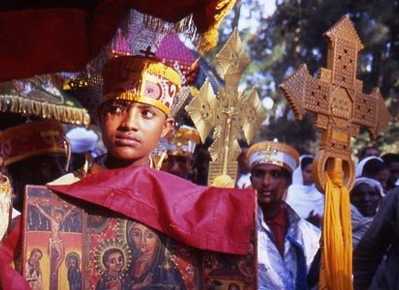 Christians in Ethiopia have long claimed to have the ark of the covenant. Our reporter investigated

“They shall make an ark of acacia wood,” God commanded Moses in the Book of Exodus, after delivering the Israelites from slavery in Egypt. And so the Israelites built an ark, or chest, gilding it inside and out. And into this chest Moses placed stone tablets inscribed with the Ten Commandments, as given to him on Mount Sinai.

Thus the ark Ã¢â‚¬Å“was worshipped by the Israelites as the embodiment of God Himself,Ã¢â‚¬Â writes Graham Hancock inÃ‚Â The Sign and the Seal. “Biblical and other archaic sources speak of the Ark blazing with fire and light…stopping rivers, blasting whole armies.” (Steven Spielberg‘s 1981 film Raiders of the Lost Ark provides a special-effects approximation.) According to the First Book of Kings, King Solomon built the First Temple in Jerusalem to house the ark. It was venerated there during Solomon’s reign (c. 970-930 B.C.) and beyond.

Then it vanished. Much of Jewish tradition holds that it disappeared before or while the Babylonians sacked the temple in Jerusalem in 586 B.C.

But through the centuries, Ethiopian Christians have claimed that the ark rests in a chapel in the small town of Aksum, in their country’s northern highlands. It arrived nearly 3,000 years ago, they say, and has been guarded by a succession of virgin monks who, once anointed, are forbidden to set foot outside the chapel grounds until they die. Read more