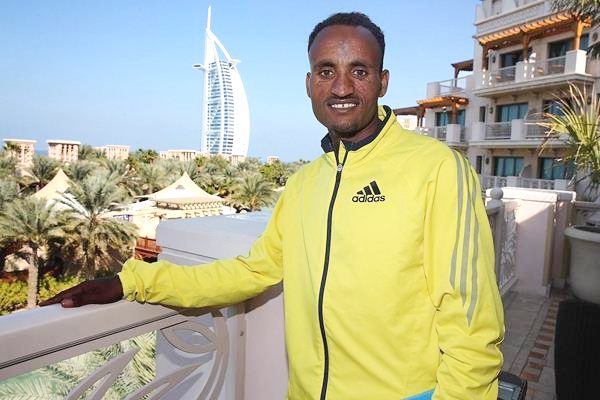 The 15thÂ edition of the Standard Chartered Dubai Marathon should again see some super-fast times at theÂ IAAF Gold Label Road Race, with Ethiopiaâ€™s Markos Geneti Â and Kenyaâ€™s Jonathan Maiyo among the favourites for the USD$ 200,000 first prize in the menâ€™s race on Friday (22).

In 2012, the race had four runners breakingÂ 2:05. It was the first time that had been achieved on a marathon course eligible for records. A year ago this increased to five men who ran insideÂ that benchmark, a finish which is still unique in marathon running.

However, one surprising aspect was that in both 2012 and 2013 it was men running their first marathon that triumphed. Ethiopiaâ€™s Ayele Abshero won in 2012 with a course record ofÂ 2:04:23Â while Lelisa Desisa ranÂ 2:04:45 last year.

Trying to continue the debutantsâ€™ winning streak are their compatriot Atsedu Tsegay and Abera Kuma.

â€œI have chosenÂ DubaiÂ for my debut because I know this is a fast race on a flat course,â€ said the 22 year-old Tsegay, who is the fourth fastest man ever on a record-eligible half marathon course with 58:47.

â€œIt is my aim to runÂ 2:05Â in my first marathon and of course I would like to continue the debutantsâ€™ win streak,â€ he added.

Tsegay prepared in Addis Abeba for his marathon debut and ran distances of up to 40 kilometres in training. â€œI will definitely follow the first group, no matter what pace they will run.â€ Read more IAAF.org