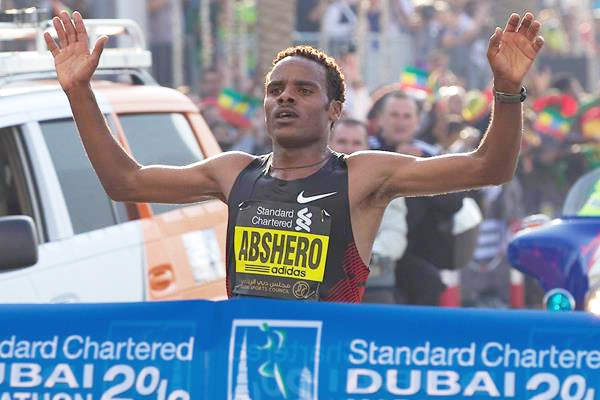 Four years after clocking a course record in Dubai, Ethiopia’s Ayele Abshero will return to the scene of his greatest triumph on the roads when he lines up at the 2016 Standard Chartered Dubai Marathon on 22 January, organisers of the IAAF Gold Label Road Race announced today.

In 2012, the then 21 year-old runner surprised a world-class field and clocked the stunning time of 2:04:23 to win the Dubai Marathon on his debut over the classic distance.

Not only was it a course record for the Dubai race, it was also at the time the fastest debut marathon ever and the fourth fastest marathon ever, on a record-legal course. It also remains his personal best.

Abshero, who celebrates his 25th birthday on Monday, did not reach the same heights in his five subsequent marathons and he failed to finish the London 2012 Olympic Games marathon, but he has still been a consistent high-level competitor and added third and fourth place finishes at the London Marathon, in 2013 and 2014 respectively, to his running CV.