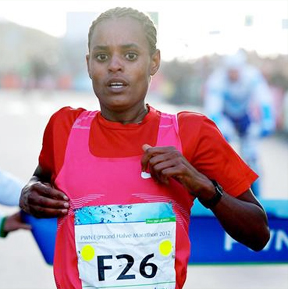 With nine runners owning personal bests faster than 2:24, eight of them Ethiopian, this is one of the best elite fields ever assembled in the history of the event.

On the super-flat Dubai course, the 2:20 barrier Ã¢â‚¬â€œ and possibly the course record of 2:19:31 Ã¢â‚¬â€œ is likely to be under attack from such a talented array of women.

On occasion, the womenÃ¢â‚¬â„¢s results in the Standard Chartered Dubai Marathon have been overshadowed by performances from the men. But that is unlikely to be the case for this yearÃ¢â‚¬â„¢s race.

Ã¢â‚¬Å“Such is the quality of the field, there is every chance that the womenÃ¢â‚¬â„¢s results in this yearÃ¢â‚¬â„¢s Standard Chartered Dubai Marathon might just outshine those of the men,Ã¢â‚¬Â said event director Peter Connerton.

A common strand runs through the brief marathon careers so far of Melkamu and Hailu. They have almost identical personal bests, achieving them in the autumn of 2012. Hailu won the Amsterdam Marathon in a course record of 2:21:09 and a week later Melkamu became the Frankfurt Marathon champion in 2:21:01, a course record as well.

While there are similarities in their development since 2012 Ã¢â‚¬â€œ both ran their third and most recent marathon at the World Championships in Moscow but dropped out in the heat Ã¢â‚¬â€œ the career background of the two women is different. 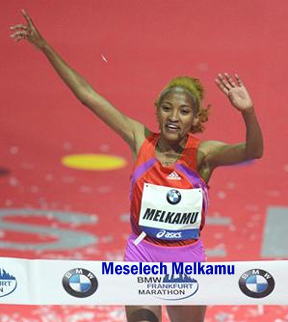 The 28-year-old Melkamu had been one of the best long distance track runners in the world before turning her attention to the road. At 10,000m she is still the second fastest ever and holds the African record (29:53.80).

Ã¢â‚¬Å“In the future I want to reach times in the marathon that are as good as the results I achieved in the 10,000m,Ã¢â‚¬Â Melkamu has said.

Hailu is five years younger and has been a road race specialist throughout her international career. Two weeks before her Amsterdam debut victory she won the gold medal at the IAAF World Half Marathon Championships in Kavarna, Bulgaria.

More success at the distance has followed with Hailu breaking the Ethiopian half marathon record with 1:06:56 in February 2013. Her recent form has been promising with fourth place in 1:09:05 at the New Delhi Half Marathon on 15 December.

In Dubai both Melkamu and Hailu should have personal best times in their sights.

One woman in the field has run faster than both of them, although the passage of time may mean that outright victory is not a realistic challenge for fellow Ethiopian Berhane Adere. Now 40, she has a personal best of 2:20:42 and won the Dubai title six years ago in 2:22:42. 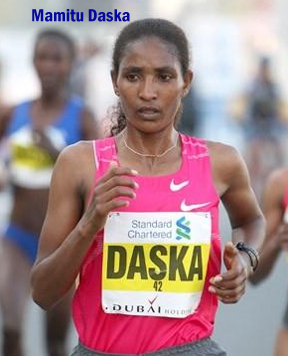 AdereÃ¢â‚¬â„¢s days of challenging for honours arenÃ¢â‚¬â„¢t over. Given good form, the world masters or veterans record, currently held by GermanyÃ¢â‚¬â„¢s Irina Mikitenko at 2:24:54, could come under pressure.

Daska was added to the field just a few days ago and the 2010 Dubai champion is said to be in good form. Her fastest time is 2:21:59, achieved in winning the Frankfurt title in 2011. Dado triumphed in the New York Marathon in the same year with 2:23:15 which remains her personal best.

They have both contested a marathon in the past autumn. Daska was fourth in Frankfurt, running 2:23:23 in windy conditions, while Dado finished 14th in New York in 2:38:06. 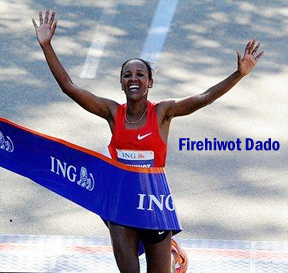 Kiros and Gobena have good memories of the 2013 Dubai Marathon. They both set personal bests, finishing second and third respectively, while Andersson broke the Swedish record in taking third place in 2011.