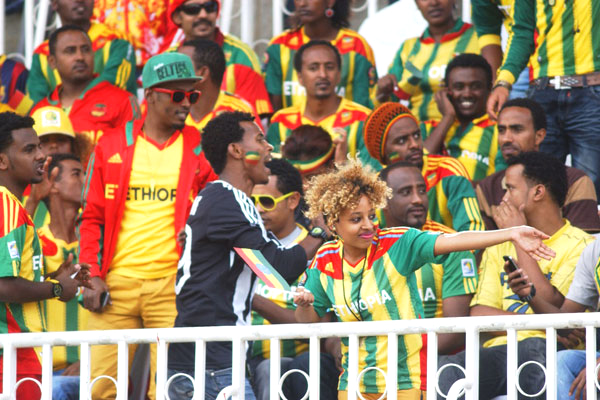 Nairobi – Ethiopia and Kenya moved on top of Group A with identical 3-1 victories over Zanzibar and South Sudan respectively in Nairobi today.

So, after the first two matches, Ethiopia and Kenya have 4 points and +2 goal differences each.

Ethiopia captain Fasika Asfaw broke the deadlock in the tenth minute from a goal mouth melee to take an early lead.

Ethiopia continued to pile pressure which paid off handsomely in the 40th minute when Fasika was brought down forcing the referee to call for a penalty which Salhadin Bargecho calmly converted to give Ethiopia a 2-0 lead before the break.

Zanzibar came from the break breathing fire with wave after wave of attack that paid off in the 70th minute when Juma Issa pulled a goal back for Zanzibar.

Ethiopia put the game to bed through substitute Yonatan KebedeÃ¢â‚¬â„¢s header to give Walia Ibex the win.

Coach Sewnet Bishaw praised his players performance, “It was a good game as every department clicked well in the entire game it’s an important win that gives us an opportunity to prepare for our last group game against South Sudan,” Sewnet told supersport.com.

Harambee Stars got their 2013 GOtv Cecafa Cup challenge back on track with a 3-1 victory over South Sudan at Nyayo National Stadium on Saturday.

Having drawn 0-0 against Ethiopia in their opening game last Wednesday, Stars needed a response and they delivered with an impressive showing against the tourneyÃ¢â‚¬â„¢s minnows.

Joackins Atudo, Jacob Keli and David Owino gave Stars victory to take them joint top of group A with Walia Ibex who had earlier beaten Zanzibar with a similar 3-1 scoreline. Read more