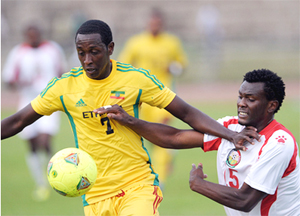 KENYA and Ethiopia battled to a goalless draw in the second Group A match of the GOtv Cecafa Senior Challemge Cup at Nyayo Stadium in Nairobi on Wednesday.

Harambee Stars as the Kenya national team is fondly known, lost three clear opportunities through David Gatere, Allan Wanga and Francis Kahata which could have changed the game.

Fans protested Uganda referee David Batte’s decision not to award Ethiopia a penalty after a Kenyan defender seemingly handled inside the box.

Kenya and Ethiopia tie on second position with one point behind leaders Zanzibar with three points.

Action switches to Uganda Cranes pitch at Kenyatta Stadium, Machakos with Burundi taking on Somalia while Tanzania will face Zambia in Group B encounters.