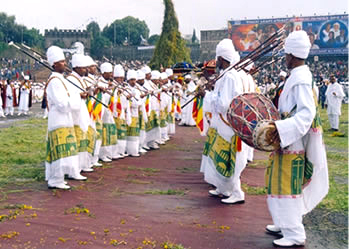 Addis Ababa – Ethiopia is alive with spring flowers that mark the beginning of a new season, as the long rainy season draws to an end. Enkutatash (gift of jewels), a name given to the New Year celebration, has passed but it is still an active and warm festive occasion.

New ideas and plans have subjugated many Ethiopians ahead of the upcoming twelve months, and it is a vital season that sees massive change in many walks of life. It is important for local people and outsiders alike, many of whom might have booked flights to the country.

People talk about the favorable climate and atmosphere throughout the year, the thirteen months of sunshine and a succession of religious and cultural festivals. Nevertheless, tourists will identify the best season to visit the country, planning to attend festivals and events on their way to see the many cultural treasures. Possessing an abundance of antiques and sacred places, Ethiopia should be in the top ten of countries visited, according to tourists and hospitality practitioners. However, it fails to do so due to various problems, despite the various attractions. As a result, most tourists fly over Ethiopia, on to Kenya, Uganda and Tanzania.

In fact, tourism in Ethiopia has never compared to the ones in Kenya and Tanzania, where it is the cornerstone of the economies. Kenya, which saw 1.8 million tourists in 2012, takes priority over Ethiopia, which saw some 600,000 visitors last year. Nonetheless, some argue that Ethiopia could narrow the gap if it promotes its intangible resources and religious ceremonies, while strengthening the unreliable infrastructure. Ã¢â‚¬Å“It simply requires work to scale up the tourism here,Ã¢â‚¬Â says Olivia Sam, a Belgian tourist. She and a couple of friends have landed in Ethiopia to experience the significant month of September, which sees two important events. Visiting the country in September and January gives the opportunity to attend prestigious religious festivals and events.

While the Ethiopian New Year (Enkutatash) and Meskel (the finding of the true Cross) fall in September, Gena (Ethiopian Christmas) and Timkat (Ethiopian epiphany) take place in January. Moreover, many weddings and other tribal festivities take place during these two months due to the dry season and sunny skies. Melisse Hinkle, content manager for the US and Canada at Cheap Flights, wrote about the advantage of visiting Ethiopia between September and May, citing the numerous events and festivals. Perhaps it is considered a peak season to visit northern Tanzania and Kenya because of the wildebeest migration in those countries, but EthiopiaÃ¢â‚¬â„¢s various religious and traditional festivals could be significant tourist attractions, according to tour operator Solomon Fekadu. Read more