Tourism development work process head with the bureau, Yemane Gedlu, told WIC that the Ashenda celebration in Tigray has attracted numerous foreign visitors and diaspora families of the region.

According to Yemane, 659,800 tourists have visited the region in the concluded budget year, among which 600,000 were foreign tourists.

The number of tourists in 2007 EC has increased by 352,000 as compared to 2006, said Yemane. The sustainable peace and development ensured at regional and national level has contributed for the increment in the flow tourists. 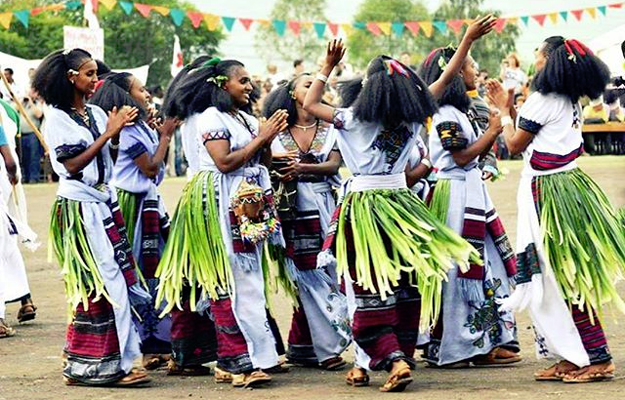 Ashenda or Shadey (Tigrinya: ኣሸንዳ, Agaw language: ሻደይ) is a festival celebrated in August (G.C.) in the Tigray and Amhara regions of Ethiopia, and in neighbouring Eritrea.[1][2] Ashenda marks the end of a two-week-long fast known as Filseta (Ge’ez: ጾመ-ፍልሰታ) when adherents of the Ethiopian Orthodox Tewahedo Church/Eritrean Orthodox Tewahedo Church gather to honour the Virgin Mary. The word “Ashenda” is currently used both in Amharic and Tigrigna languages to denote a vertical sewerage channel that passes water down to the ground from the top of a roof. In the Khimra sect of Agew, Ashenda means the “tall green grass”, estimated at around 80–90 cm minimum height that girls wear around their waists during the holiday. In the tradition of this religious festival, blades of grass are strewn on the floors of homes and shops as a kind of welcome mat. The festivity of Ashenda has no common name throughout the country. For instance,

This cultural festivity was originated from two historical legends that occurred in different periods. These were;

The festival of Ashenda has cultural, religious and economic importance, and encourages industriousness. Once traditionally a girls’ festival, it has since gained widespread recognition and popularity in the northern part of the country and among communities of the Ethiopian diaspora.

One thought on “Ashenda Celebration increases tourist flow to Tigray”