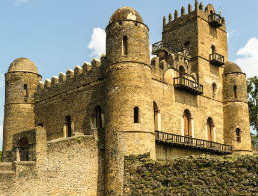 Addis Ababa, Ethiopia –  Set on about 70,000 square metres, the fortress-city of Fasil Ghebbi in Gondar City in north western Ethiopia is among the surviving parts of the country’s architectural civilisation.

Surrounded by a 900-metre-long wall with 12 entrances and three bridges, the city, which was put on the World Heritage List in 1979, has palaces, churches, monasteries and public and private buildings with Nubian, Hindu and Arab influences, and subsequently transformed by the Baroque style brought to Gondar by Jesuit missionaries.

Fasil Ghebbi was the residence of Ethiopian Emperor Alem-Seghed Fasilides (Fasil), who reigned from 1632-1667, and his successors in the 16th and 17th centuries. Ghebbi is the Amharic word for a compound or enclosure. Fasil Ghebbi is located in the Amhara National Regional State, in the North Gondar Administrative Zone of Ethiopia.

Between the 13th and 17th centuries, Ethiopian rulers moved their royal camps frequently. Fasilides settled in Gondar, and established it as a permanent capital in 1636.

The main attraction is Fasil’s Castle built in the late 1630s and early 1640s on the orders of Fasilides, who was greatly interested in architecture. Today, the main castle stands in a grassy compound surrounded by fortresses.

“The structures in this fortress were constructed under the ancient Ethiopian lalibela architecture (that involved mixing of lime mortar),” our guide Anteneh Migussie says as we embark on the tour of the site.

“We have six different castles in here. Each emperor or empress built his or her own as a way of making history, but maintained and used the other existing castles,” Migussie adds.

We began by climbing the stone stairs of the three-storied Fasil’s Castle. We walked on wooden floors, through the original wooden door, from the large reception hall to the adjacent men’s dining hall on the top floor. Next is the women’s dining hall and Queen’s chapel; below is the kitchen and storehouse.

Further along is a room that still has the original wooden ceiling where the throne was stationed and where the emperor met his close advisers. His other subjects greeted him through a window at the main reception hall.

After Fasil, successive kings continued building, improving the techniques and architectural style, many of which survive either in whole or part today.

Adlam Seghed Iyasu the Great (1682 – 1706), a grandson of Fasilidas, was particularly active. His castle, centrally located in the main compound, was described at the time as finer than the House of Solomon. Its inner walls were decorated with ivory, mirrors and paintings of palm trees, and its ceiling was covered with gold-leaf and precious stones.

“Iyasu’s castle was the most decorated of the castles here. From afar it looked like a horse’s saddle seat in shape. The arch roof was destroyed during the war with the Italians,” Migussie says.