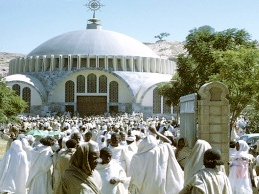 Tsion taking place at Axum once every year has been serving as tourist attractions, City administration said.

As many foreigners and local tourist participate in the festival, it is becoming a reason to attract tourists.

Preparations have already finalized to receive more than 4 thousand guests on the 29th of November this year; Public Relations Head Askale Berhane said.

According to Askale, this yearly ceremony has contributed to the rise of the number of visitors every year that more than 70 thousand local and foreign tourists have visited Axume in the first quarter of this fiscal year. .

Pin pointing the contribution of the festivity to introduce the Axum obelisk, other religious and historical heritages around the town, she added over 54 million EB was gained in first quarter.