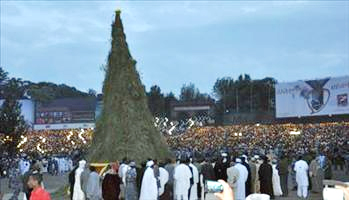 Addis AbabaÃ‚Â (ENA) – Demera, the eve of the Finding of the True Cross (Meskel) upon which Jesus Christ was crucified, was celebrated on Thursday colorfully throughout the country.

Here in the capital, the day was celebrated in the presence of tens of thousands of residents of the Addis Ababa City, members of the diplomatic community and foreign tourists as well as senior government officials.

Deacons and priests as well as Sunday school students attired with white blank traditional clothing played religious songs and hymn that added color to the holiday.

Abune Mathias on the occasion said the finding of the True Cross, the Church celebrates every year is a symbol of peace. The Patriarch called on the faithful to work hand in hand to extricate poverty from the country. He called on the youth to work together to realize the growth of the country. He urged stakeholders to strengthen effort to inscribe the Demera celebration on UNESCO World Heritage list. He said various religious institutions should stand in unison and rally behind the government for the realization of Growth and Transformation Plan.

The Ethiopian Orthodox Church has been celebrating Demera for over 1,600 years. Empress Helena, mother of Constantine, the first Christian Emperor of Rome, traveled to the Holy Land in 326-28, to discover the true cross. She discovered the hiding place of the three crosses that were used to crucify Jesus Christ and the two thieves, and a miracle revealed which of the three was the True Cross. Empress Helena is considered by the Eastern Orthodox, Oriental Orthodox, Eastern and Roman Catholic churches, as well as by the Anglican Communion and Lutheran Churches as a saint.