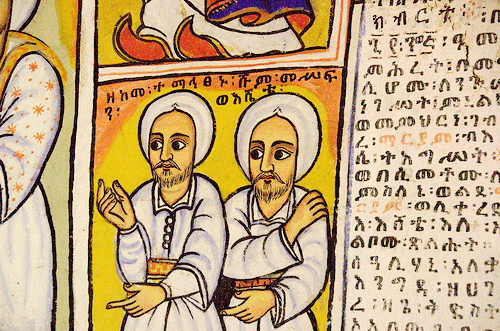 Dr. Garry Jost,Ã‚Â religious studiesÃ‚Â faculty, joined colleagues from Portland and Texas to digitize Ethiopian manuscripts of the Old Testament while attending the EMML @ 40: The Life and Legacy of the Ethiopian Manuscript Microfilm Library conference at St. John’s University in Minnesota in July 2013.

EMML is a project of Hill Museum and Manuscript Library, which has projects in a number of countries for the sake of preserving their manuscript heritage. At the conference, scholars from the USA, Germany, France and Ethiopia gave presentations.

For three days prior to the conference, Dr. Jost joined colleagues from Portland and Texas to collate Ã¢â‚¬â€œ i.e., type into electronic form Ã¢â‚¬â€œ Ethiopian manuscripts of the Old Testament, whose microfilm or digital images are only available onsite. These manuscripts are written in the Ge’ez language, the ancient Ethiopic language, which remains the liturgical language of the Ethiopian Orthodox Church. The modern Amharic language, which is the national language of Ethiopia, developed from Ge’ez.

This work is part of theÃ‚Â Textual History of the Old Testament projectÃ‚Â directed by Dr. Steve Delamarter, George Fox Seminary. The collation of these manuscripts paves the way for research to identify manuscript families, to be presented at theÃ‚Â Society of Biblical LiteratureÃ‚Â annual meeting in November 2013 in Baltimore.

Dr. Garry Jost’sÃ‚Â areas of expertise include biblical languages, biblical interpretation, Hebrew Scriptures (Old Testament), and the history and faith of Judaism. He is an ordained minister, and his background includes teaching high school German and Spanish and serving as pastor of a Mennonite congregation.