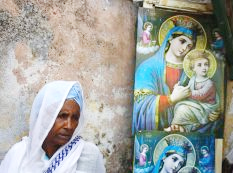 The Ethiopians have no property in the Church of the Holy Sepulcher, only access rights; but they do have a little monastery nearby, known as Deir es-Sultan, that is worth a visit.

Jerusalem speaks with many voices, and in a babble of tongues. Nowhere is this more in evidence than the Church of the Holy Sepulcher, in the heart of the Old CityÃ¢â‚¬â„¢s Christian Quarter. The cavernous medieval structure stands, it is believed, where Jesus was crucified and buried. It is shared today Ã¢â‚¬â€œ unequally and uneasily Ã¢â‚¬â€œ by several Christian denominations (none of them Protestant). The Greek Orthodox are the major Ã¢â‚¬Å“shareholders,Ã¢â‚¬Â followed by the Roman Catholics (Ã¢â‚¬Å“LatinsÃ¢â‚¬Â), Armenian Orthodox, Copts (Egyptian) and the marginalized Syriac Orthodox.

The Ethiopians have no property in the Holy Sepulcher, only access rights; but they have a little monastery, known as Deir es-Sultan, on the roof of a medieval annex. The entrance to the compound is from the Ninth Station of the Cross, up a slightly obscured stairway off Suq Khan e-Zeit, the artery of the Arab market that slices from the Damascus Gate toward the Jewish Quarter. If you can spot a sign on the street leading up to MikeÃ¢â‚¬â„¢s Center, a hole-in-the-wall Internet cafÃƒÂ© halfway up the stairway, youÃ¢â‚¬â„¢re home free.

Step into the Ethiopian courtyard opposite the Coptic monastery. A weeping willow (rather symbolically) casts some shade across the bare stones, where a defunct water pump, ruined Gothic arches and tiny monksÃ¢â‚¬â„¢ cells cower under a skyline of rival crosses. The Ethiopian church has known better days: it lost its lands in a Marxist coup in the 1970s, and the gentle monks sent to the holy city live quietly in scriptural poverty. Read more