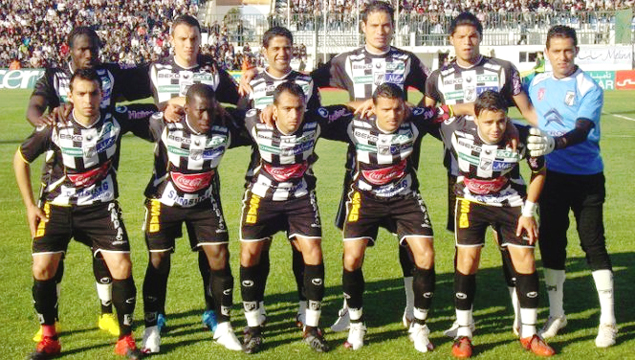 The easier than expected victory at a national stadium 2,300 metres (7,550 feet) above sea level in Addis Ababa completed a successful weekend in the competition for the country.

Etoile Sahel forced a 0-0 draw at Stade Malien of Mali in the same group to enhance hopes of a top-two finish after the six-round mini-league phase and a passage to the semi-finals.

CA Bizertin rose to the top of Group B as Yassine Salhi scored three minutes from time to snatch a 1-0 home win against title favourites TP Mazembe from the Democratic Republic of Congo.

An eagerly anticipated top-of-the-table clash in Ethiopia was all but settled within 28 minutes of the kick-off as 2007 and 2008 Confederation Cup winners Sfaxien surged to a three-goal lead.

Ivory Coast-born striker Idrissa Kouyate scored his third goal in as many African outings to put the club from Mediterranean industrial city Sfax ahead after 10 minutes.

Defender and captain Ali Maaloul scored off a 24th-minute penalty and midfielder Maher Hannachi, the victim of the foul that led to the spot kick, struck three minutes later.

Group stage debutants Saint George improved after the break and Umed Ukuri, one of many national team stars in the line-up, made persistent pressure pay with a consolation goal.

Sfaxien, who are emerging as the biggest threat to 2010 FIFA Club World Cup runners-up Mazembe, have nine points after three rounds, Etoile four, George three and Malien one.

Bizertin, winners of the now defunct African Cup Winners Cup in 1988, were unlucky not to be ahead by half-time in a game held behind closed doors amid post-Arab Spring security concerns.

Although less forceful during the second half, the Tunisians always looked the likelier victors and veteran Congolese goalkeeper Robert Kidiaba deflected a shot from midfielder Salhi into the net.

Success moved Bizertin to five points, one more than Mazembe. Entente Setif of Algeria have two points and FUS of Morocco one before a late Sunday clash in Rabat.

The Confederation Cup is the second-tier CAF club competition, offering a $660,000 (500,000 euros) first prize and a one-off Super Cup fixture against the CAF Champions League title-holders.