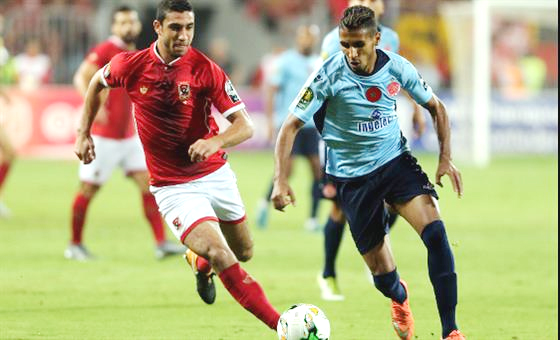 Al Ahly of Egypt were unable to build on a great start and had to settle for a 1-1 first-leg draw with Wydad Casablanca of Morocco Saturday in the CAF Champions League final.

But leading Wydad scorer Achraf Bencharki levelled on 16 minutes and dominant Ahly were unable to regain the lead before a crowd restricted to.

Wydad host the return match next Saturday and are favoured to pocket the record $2.5 million (2.1 million euros) first prize given their home form in Africa this season.

The Moroccan outfit won all six home matches en route to the final, including a 1-0 last-eight victory over defending champions Mamelodi Sundowns of South Africa.

Apart from the record purse, the African champions qualify for the even more lucrative FIFA Club World Cup in the United Arab Emirates during December.

One-touch passing down the left flank created the early chance for Zakaria, and his looping left-foot shot went over goalkeeper Zouheir Laaroubi into the corner.

Bencharki stunned the home crowd into silence when his glancing header off a pin-point Mohamed Ounajem cross flew into the far corner.

After slamming six goals past Etoile Sahel of Tunisia last weekend at the same venue in the second leg of a semi-final, much was expected of Ahly.

The early goal was followed by intense pressure from the home side with Walid Azaro, scorer of a hat-trick in the semi-final rout, twice going close.

Morocco-born Azaro fired over when one-on-one with the goalkeeper and was then foiled by a brave block from Laaroubi.

Another Ahly chance was wasted when Nigerian Junior Ajayi failed to connect properly with a cross and his header flew wide when it should at least have been on target.

Following the Bencharki goal, Wydad showed more adventure than in earlier away Champions League matches without creating a clearcut chance.

The visiting team suffered a major blow when livewire winger Ounajem was forced to come off injured during the opening half with Abdeladim Khadrouf taking his place.

It seemed Ahly had to score early in the second half as they attacked continuously, but a well-organised Wydad defence somehow survived.

The Egyptian outfit also had a genuine penalty appeal over a foul on Azaro rejected by the Ethiopian referee.

Late substitute Emad Meteab almost snatched a stoppage-time winner for Ahly as his snap shot from outside the box flew just wide.

Wydad have featured in two previous Champions League finals, defeating Al Hilal of Sudan in 1992 and losing to Esperance of Tunisia six years ago.