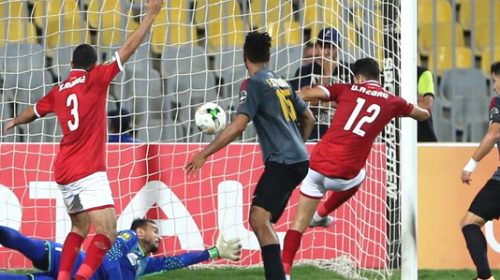 Esperance return to their base with their heads high, after holding record winners, Al Ahly of Egypt to 2-2 draw away in the quarter final first leg on Saturday in Alexandria.

The “Blood and Gold” now have the advantage as a goalless draw in the reverse next weekend will be enough to see them through to the last four.

The exciting game was a rollercoaster affair, with hosts Ahly taking the lead from the spot through Abdullah El Said after ten 10 minutes, only for Taha Yassin Khenissi to find the equalizer on 23 minutes.

Ahly, eight-time winners of the premier continental club championship, started the game on a positive note and could have taken the lead as early as the second minute, but Ahmed El Sheikh’s effort was ruled offside.

Ahly took a deserving lead the ten minutes into the game when Azaro won a penalty after he was fouled by Montasser Talbi in the vital area. El Said made no mistake from the spot to give the Red Devils an early lead.

The host could have doubled their lead seven minutes later but Azaro’s header from El Sheikh’s cross went just wide.

Ahly were punished when Khenissi finished off a Ferjani Sassi flick from a corner for the equalizer midway into the first half.

Esperance were the better side for the remainder of the opening half, which ended one-all.

Soon after the restart, the guests took the lead after a serious blunder from Ahly goalkeeper Ekramy. Chaalali’s harmless free-kick was expected to pose no trouble for Ekramy, but the latter slipped the ball into his own net to give Esperance an unlikely lead after 48 minutes.

The Egyptian champions threw every man in attack, and a free-kick by substitute Saleh Gomaa saw Azaro tap in for the leveler after Cherifia had spilled onto his path.

Veteran striker Emad Metaeb tried to score a late winner for Al Ahly but his effort was blocked by Esperance’s defense as the game ended in a 2-2 draw.

The return leg is scheduled for next Saturday at Rades Olympic Stadium near Tunis, with aggregate winner progressing to the last four.

We were the better side but were unlucky not to win. We missed numerous chances and our opponents scored from their few chances. I have said before that the first leg won’t decide anything and we will play to win in Rades. The return leg will need a balanced approach. We have to stay focused and do our best. We have a lot of work to do but I trust my players and their capabilities.

We had a good game against a great team. Many people describe this clash as ‘a final before the final’ as Ahly and Esperance are two of the greatest teams on the continent. We prepared well for this game and I believe we deserved to win. I’m not 100 per cent satisfied with our performance. The return leg will be difficult for both sides. Nothing is decided yet and we have to prepare well for the reverse.