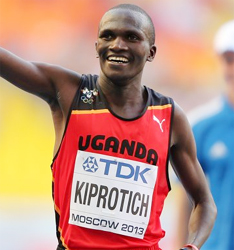 MOSCOW Ã¢â‚¬â€ Olympic champion Stephen Kiprotich of Uganda pulled away late in the race and won the menÃ¢â‚¬â„¢s marathon gold medal Saturday at the World Championships.

Kiprotich was the surprise winner at last year’s London Games but started as one of the favourites in Moscow and became the first non-Kenyan to win the title since 2005.

No Kenyans were in the top three for the first time at the world championships since 2005. Kenyans had won the last three world titles.

The top Kenyan on a sunny and warm afternoon in Moscow was Peter Some in ninth place.