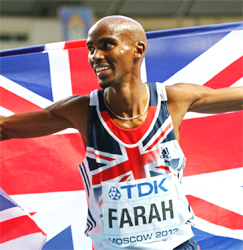 Mo Farah completed a dream double-double tonight by winning his second gold medal of the World Championships in Moscow to add to his twin Olympic triumphs.

The 30-year-oldÃ‚Â claimed the 5,000 metres title at the Luzhniki Stadium, producing another trademark lung-bursting kick down the home straight, just six days after racing to glory in the 10,000m.

s, crossing the line ahead of Ethiopia’s Hagos Gebrhiwet.

Victory ensured he become only the second man ever after Ethiopian great Kenenisa Bekele to win both long-distance titles at the Olympics and the World Championships.

It took Farah’s tally of global gold medals to five, having also won the 5,000m two years ago in Daegu. More