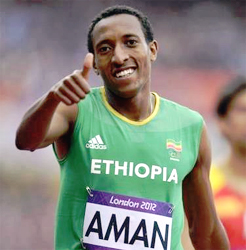 The Ethiopian teenager, who won the world title in Moscow with Rudisha absent through injury, said Thursday that the mark of 1 minute, 40.91 seconds set by the Kenyan at the London Olympics “is within reach.”

“I think it is all about believing in yourself and convincing yourself … with hard work,” Aman told reporters back in his home country.

The 19-year-old Aman added the world outdoor title to his indoor title last week in the Russian capital, although his winning time of 1:43.31, his season’s best, was still nearly three seconds off the record Rudisha set in majestic fashion at the Olympics last year. At his first games, Aman faded to finish sixth in that 800 final.

Still, a 17-year-old Aman did beat Rudisha in 2011 on the Diamond League circuit to end a 34-race winning streak by the lanky Kenyan, who remains the dominant force in two-lap running. Rudisha skipped the worlds because he hadn’t fully recovered from a right knee problem.

Instead, Aman’s triumph was historic for Ethiopia as its first outdoor world title in a distance below 5,000 meters. He surged ahead to beat Nick Symmonds of the United States in an emphatic finish at Luzhniki Stadium.

“Moscow was great for me. It was great for Ethiopia too,” Aman said. “Every qualifier was like a final for me, it was difficult. It was risky. … A slight mistake could eliminate you. The final was even more difficult. I know most of the athletes but in the final everybody tried their best to win gold for their nation and I was in a difficult position.

“But I have beaten that difficultly . I have won the race. I am really happy for myself and even more for my country. I don’t have words that express my happiness,” a smiling Aman said.

He also received praise at home from one of the country’s greatest runners ever, Haile Gebrselassie, who compared Aman’s triumph to Abebe Bikila’s breakthrough first Olympic gold medal for Ethiopia in the marathon at the 1960 Summer Games in Rome.