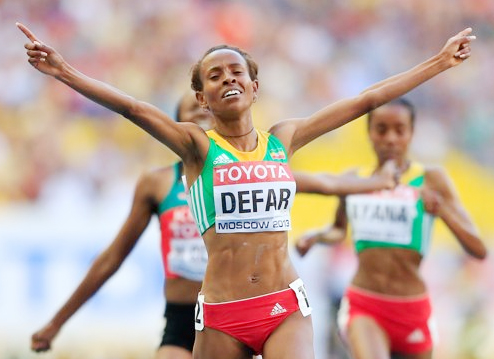 Meseret Defar added yet another global 5,000 metres gold to her bulging collection when she won the world title with a textbook performance on Saturday, aided by her Ethiopian team mates.

Defar, twice Olympic champion and now double world champion, also has a world silver and three global bronzes in the event after an extraordinarily consistent run over the past nine years and she was never threatened in her latest assault.

A pedestrian first half of the race briefly suggested some of the fast-finishers might be able to make a fight of it but with four laps to go Defar’s team mate Almaz Ayana put her foot down and immediately spread the field.

By the bell it was just the two Ethiopians and Kenya’s Mercy Cherono and Ayana played her role of domestique to perfection, towing Defar to the 200m mark when the favourite blasted clear to win with ease in 14 minutes 50.19 seconds

Ethiopia’s Tirunesh Dibaba won the 10,000 metres earlier in the week