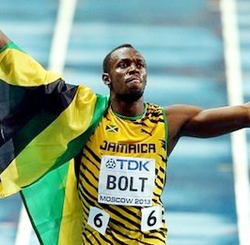 In heavy rain, the 26-year-old Jamaican made amends for his false start in Daegu two years ago and further cemented his status as the greatest sprinter in history.

The six-time Olympic champion overtook Justin Gatlin in the final stages, forcing the American to settle for silver in 9.85.

It was another convincing victory for the sport’s brightest star, who demonstrated his superiority by equalling the eighth-fastest time of his career in unfavourable conditions.

Such is Bolt’s dominance of the event, he does not have to be at his quickest to win major championships.

“I am happy but I wanted to do better,” he told BBC Sport.

“My legs were sore after the semi-finals, I don’t know why, but the world record wasn’t on so I came out just to win.

“Back in Jamaica, they do not expect less than that from me. They always expect me to dominate!”

Dasaolu said: “Yesterday was the first time I had run out of blocks for three weeks and I was just happy to be in the final.

“This is my first year going under 10 seconds and hopefully I can build on this.”