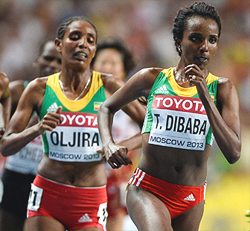 Dibaba, a two-time Olympic champion at the 10,000, won the world title for the third time but first since 2007.

Dibaba can rightly be lauded as queen of the 10km event, having also won two Olympic golds over the distance.

The 27-year-old missed the Daegu worlds in 2011 because of injury but has never lost in her 10 outings over 25 laps of the track.

The self-proclaimed “baby-faced destroyer”, a nickname she professes to adore, comes in the mould of male compatriots Haile Gebrselassie and Kenenisa Bekele.

She also has four golds and two silvers from the world cross-country championships.

The race itself played directly into Dibaba’s hands, American Shalane Flanagan taking up the early running, followed by Japan’s Hitomi Niiya, with Oljira and Dibaba close on their tails.

After five laps, a 10-strong pack had developed with the field strung out, lightning flashes and peels of thunder ripping over the Luzhniki Stadium.

Flanagan, the 2008 Olympic bronze medallist, took them through the 3km mark in 9:20.85 as the rain began to fall before Niiya hit out on her own.

She was soon reeled in by the pack, the 32-year-old Flanagan falling off the pace and Dibaba sitting on the Japanese runner’s shoulder through the halfway marker.

Although the pace was anything but electrifying, the pack was now cut to Niiya leading Dibaba and Oljira, the Kenyan trio and Bahrain’s Ethiopian-born Shitaye Eshete.

Chepyego and Eshete were next to fall off the Japanese’s pace-setting, Dibaba looking completely untroubled.

The rain eased off as the storm worked its way around the stadium and with two laps to go Niiya still had the lead.

At 600 metres, Dibaba and Oljira briefly communicated and on the bell, the former bolted.

She was chased down the back stretch by Cherono, the 2012 African champion over both 5000m and 10,000m making her debut at a global championship at the age of 30, but to no avail as the Ethiopian held out for a very comfortable win.