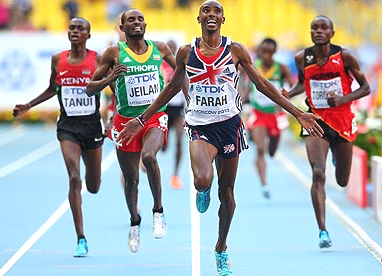 The race began at an easy pace over the first 2,000m, after which Farah moved effortlessly to the front, a tactic that brought two Ethiopian runners forward to increase the speed. Farah then settled in between his two training colleagues, Dathan Ritzenheim and Galen Rupp in the middle of the stretched-out field.

The first 5,000m were covered in a gentle 13min 49sec, which entirely suited a very relaxed-looking Farah, with nobody apparently willing to take the initiative.

The Kenyan Moses Tanui led the field for several laps and into the last 2,000m, before Farah moved again to the front with four laps to go.

Ritzenheim and Rupp briefly passed Farah, but the Briton worked his way to the lead with two laps to go and Rupp a protective presence on his shoulder.

As the bell sounded, Farah stretched his legs and kicked, but Ethiopia’s Ibrahim Jeilan came strongly on to his shoulder, and for a moment it looked less than a foregone conclusion.

Down the home straight, though, the Briton found an extra ounce of pace to add the world championship to his Olympic title.