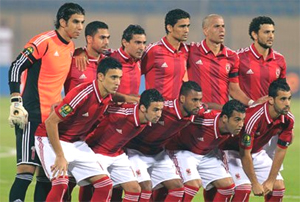 CAPE TOWN, July 30 (Reuters) -Ã‚Â African Champions LeagueÃ‚Â holdersÃ‚Â Al AhliÃ‚Â have been denied permission to postpone a key group match despite not having a venue for Sunday’s clash, the club and confederation of African football (CAF) said on Tuesday.

Ã‚Â Egypt’s military are refusing to allow the hugely popular Cairo club to playÃ‚Â South Africa’s Orlando Pirates in either Alexandra orÃ‚Â CairoÃ‚Â because of security concerns, even though the tie must be played behind closed doors.

Ã‚Â Ahli directorÃ‚Â Hady KhashabaÃ‚Â said they were now looking to find another venue but that task was complicated by the fact that the Egyptians want to play late at night because of Ramadan.

Ahli do not want to compete during the day while their players are still fasting and the only venues with adequate floodlights are in the major cities, where officials have banned all sport.

They had asked to postpone the Group A fixture until after Ramadan but this was rejected, CAF said.

The match had originally been scheduled for Sunday night with a 10pm local time kick off at Cairo’s Air Force Stadium.

Ahli, who command passionate support across the Arab world, must play behind closed doors because of a ban imposed as a result of supporter violence earlier in this year’s competition.

Since the military toppled president Mohamed Morsi in early July, nearly 300 people have been killed in violence, including 80 of his supporters gunned down at dawn on Saturday.

Pirates had asked for the match to be moved to a neutral venue amid concerns about travelling to Egypt, but CAF rejected this too, a spokesman told Reuters.

The governing body have told the South Africans to travel to Cairo, where they are due to arrive on Friday, in the hope that a solution can be found.