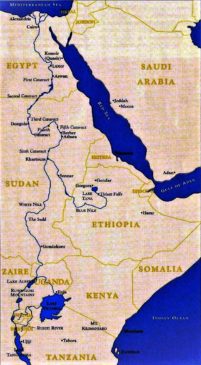 It was in the 4th century BC that the Greek historian and philosopher Herodotus called Egypt the “Gift of the Nile” because he noticed how much life in Egypt depended on the Nile. It is true the country that we know as Egypt couldn’t have existed and its great history and civilization wouldn’t have been possible without the Nile. Herodotus’ statement is no longer valid but current day Egyptians still believe that Egypt is a Gift of the Nile. As a result, 90% of the population of Egypt lives along a narrow strip along the Nile.

For centuries, Egyptians were indeed the unchallenged masters of the Nile, drawing on the river to build ancient empires and modern republics for themselves, while restricting upper riparian countries from using it for any sort of development. These restrictions have caused and are still causing substantial damage to the population of upper riparian countries. The current row with Ethiopia, which is building the Grand Renaissance Dam, is one such good example.

Whenever challenged, Egypt would use all kinds of tricks to maintain its upper hand.

Colonial Treaty
A 1929 agreement with Great Britain attempted to give Egypt a virtual monopoly over the Nile waters with veto rights over all upstream projects. This attempt gave Egyptians a reason for interfering in the development of upper riparian countries. Ethiopia was never invited nor took part in the treaty and Sudan didn’t have a say as it was jointly ruled by Egypt and Great Britain at the time. In 1959, Egypt signed a second agreement, this time with Sudan, a newly independent country by then, to try and solidify its first “International Agreement”. The deal attempted to guarantee the two countries use of 90% of the Nile waters.

Today, Egypt is trying to force Ethiopia into signing an agreement that will recognize Egypt’s veto power over the Nile by holding Ethiopia’s Grand Renaissance Dam hostage. This Dam will boost Ethiopia’s generating capacity by 55% and be a huge contribution to the improvement of the lives of tens of millions of Ethiopians. It will provide electricity to tens of millions of Ethiopians living in rural areas of the country as well as generate billions in revenues from the sale of surplus electricity to neighboring African countries. The generated income will in turn help Ethiopia with its food production, agriculture outputs and help grow other sectors of the country’s economy.

Nile Basin Countries
The human cost of this policy has been astronomical. Lots of people have died in conflicts supported by the Egyptians. In the 1980s, more than a million of Ethiopians died due to recurring famine & starvation while Nile waters were wasted & used inefficiently in Egypt. Millions of lives could have been spared unnecessary suffering and deaths in a country that is the source of 85% the Nile water.

Shared Resource
The Egyptians should realize that the Nile is a shared resource and thus should stop claiming that it is all theirs. They should start thinking of the Nile as a shared resource and start working on the various ways of sharing this resource. The first step that the Egyptians should take is stop wasteful usage of water and start sharing the saving with other riparian countries. The question is how much, if any, water could the Egyptians save by using water efficiently? Egyptians might refer to the Falkenmark indicator, one of the most commonly used measures of water scarcity, to indicate that they are suffering from acute water poverty and thus need more water instead of being able to save water. They have created maps of what might happen if they lose some water while Ethiopia is filling the Grand Ethiopian Renaissance Dam.

Second, like their ancestors, the Egyptians should start thinking big. The Nile is not the only source of water for the Egyptians. There is an abundant supply of brackish water and two huge seas that are waiting to change Egypt into a lush green country. Desalination plants are becoming cheaper by the day. Egyptians should put their best and their brightest to the task and start building desalination plants to augment the water they are getting from the Nile. As their conquest over the other sources of water increases, their reliance on the Nile River will keep going down. Over time, the Nile will end up being a tiny portion of the water that the Egyptians use.

Other Riparian Countries
Other riparian countries should realize that today Egyptians have put themselves in a tight spot. Trying to establish “historical rights”, they have created usage models that will need to waste water in the agricultural fields. Moving away from wasteful usage is going to take time. Building large desalination plants will still take more time. Taking this into consideration, the other countries should give the Egyptians time to realize a reduction of their dependence on the Nile waters. Over time the Egyptians will be able to share the Nile waters with other riparian countries. Working together towards this end is the best solution for all concerned countries.

Egypt can start working with other riparian countries immediately. For instance, Egypt today is arguing about the rate at which the Ethiopian Renaissance dam is filled. They claim that unless the dam is filled in 12 to 20 years Egypt will suffer from water shortage. However, given the fact that Lake Nasser has a storage capacity of 132 billion cubic meters, Egypt could easily compensate for the water that is stored in the Ethiopian dam even if the Ethiopian dam is filled in two year. The Grand Ethiopian Renaissance dam stores 70 billion cubic meters and every year most of the water will go down to downstream countries after electricity is generated. Once the Ethiopian dam is filled, all the water that comes into the dam will have to be released to downstream countries. Egypt will only suffer from a loss of the energy capacity of its hydroelectric dams but this loss will be temporary. Considering Egypt generates only 6.7% of its power from the Aswan Dam, the power loss for Egypt will be much less than 6.7%, as the head loss in Lake Nasser will be a few meters. The loss that Ethiopia will suffer from not using the Grand Ethiopian Renaissance Dam is about 55% of its capacity.

The Egyptians should look at the example left for them by their ancestors and follow in their footsteps by thinking big and taking charge of their development by taping the waters underground and the Red and Mediterranean Seas. Other riparian countries should work with the Egyptians as they wean themselves from complete reliance on the Nile waters and move towards reliance on other sources of water for their development