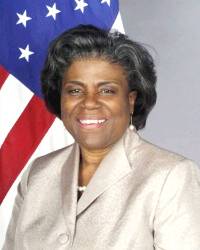 ate for African Affairs Linda Thomas-Greenfield said the government of the United States pays high attention to the Grand Ethiopian Renaissance Dam (GERD) which Egypt is campaigning against to halt its construction.

The Secretary admitted that the US government held â€œintensive discussions with both sides and urged them to work out their differences.

Among some of the questions that the Assistant Secretary addressed, was that the administration in Washington was concerned because of the trade-offs between the Ethiopian and Egyptian governments regarding the GERD. â€œWe had made intensive discussions with both sides on this issue she said. And our position is, they need to talk, they need to communicate; they need to work out their differences, Thomas-Greenfield explained.

The tripartite negotiation between Ethiopia, Sudan and Egypt that was supposedly expected to implement the recommendations of the International Panel of Experts (IPoE) on the dam was suspended after the first two sides failed to narrow their differences, and consequently trade-offs continued.

The secretary urged that the two countries needed to resume negotiations immediately for mutual benefit. We knew that some talks had taken place and we encourage them to continue to have more talks so that they can find a solution that benefits both sides,â€ Thomas-Greenfield said. This is the first time in a three-year period that the American government has expressed concern over the increasingly deteriorating relationships between the two parties, Ethiopia and Egypt.

Located west of Addis Ababa in the Metekel Zone, Benishangul-Gumuz region of Ethiopia, 42 km from the Ethio-Sudan border, the GERD is one of biggest hydropower dams projects in Africa.