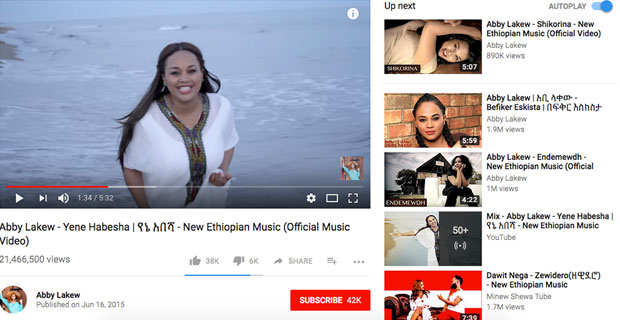 A successful vocalist is a respected social figure with admirable talent and profession. Nevertheless, in pondering over their lives, it becomes evident that music really bakes no bread in Ethiopia. Asked of their lifetime earnings, veteran musicians would often say, “my riches are the people.”

Albeit the grim reality, however, with the diversification of the internet and arrival of the game changing social media, music is making lucrative money online these days. In a country where there is no royalty payment for the use of works of music, the only source of revenue becomes the sale of an album or fees paid for stage performances.

The proliferation of video sharing websites has created ample opportunities for generating revenue. It has motivated musicians, making them believe that their work of art is worth something. Getesh Mamo, who has recently become more popular with his two singles, is the fourth most viewed musician on YouTube in Ethiopia concurs.

“At a time when the music industry’s profitability is threatened by various factors, including copyright infringements, what we are earning from the website is compensatory,” he said. “It is paying off the musicians well, unlike their previous loss and fruitless efforts.”

Out of about 70 video sharing platforms, musicians are using the prominent video sharing websites and YouTube channels to upload their music video and make money out of it. Amongst these sites, Dire Tube, Ethio One Love Entertainment and Hope Entertainment are the notable ones that are producing the lion’s share of the music video revenue the musicians are generating from YouTube.

Of the Ethiopian videos that were uploaded from January 2014 to April 2016, the most viewed is Abby Lakew’s Yene Habesha, with 21.4 million views. From the top ten most viewed videos on YouTube, three are by entertainment channels and two by individual ones. Ethio One Love Entertainment and Hope Music take the lead in this regard.

YouTube pays by cost per impression (CPI), which is the rate of every thousand views of the ads they attach to videos. While Youtube does not publish its CPI rates, online marketing firm Penna Powers estimates their current CPI ranges from around half a dollar to as high as 10 dollars.

Seemingly unaware of the technical details, most musicians use third party channels like Dire Tube to generate money from their music. Thereby, sharing almost half of their revenue with these sites.