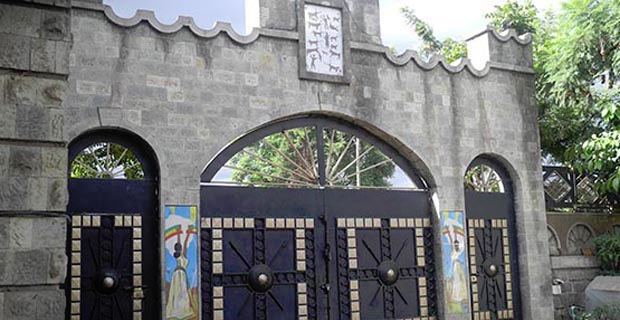 Berhan Ethiopia Cultural Center, which is also known as ‘The Little Ethiopia‘, received a short five-day notice to demolish its fences sculptured with Ethiopian historical sites, for road construction purposes.

The Kirkos District Land Management Bureau has warned the owner of Berhan Ethiopia Cultural Center that it will demolish the fence of the centre if she fails to report in five days.

People from the district posted a notice on the wall of the centre on July 11, 2017, warning the owner to demolish the fence of the centre for the construction of a road underway which extends from Bole to the African Union which was started two years ago.

“I object to that,” Sabella Abay, founder of the centre said, “They have to notify me before posting the warning.”

“The warning came out of the blue. Moreover, they already entered my home and took the measurements five metres towards my home,” said Sabella.

The centre sprawls on 960sqm of land and has been promoting Ethiopian history and culture to local and foreign visitors for the past two decades.

To not see her centre demolished, Sabella has been communicating with officials from the City Administration, the District and the Ministry of Culture & Tourism, but has received no response, according to Sabella.

Berhan Ethiopia was established in 1987 in Lima, Peru, when Sabella was promoting Ethiopia with the maxim “Other Face of Ethiopia.”

The cultural centre came to Ethiopia when her friend Amarech Tademe, a cultural enthusiast, donated her parents’ home to her 24 years back. From that time on she has been promoting little Ethiopia in Addis Abeba.