Ethiopia has proved itself as a place for seasoned travelers. The country features beaches, stunning green valleys, as well as Fire Lake filled ravines. A peaceful tranquility flows in Ethiopia, a country known for its historical sanctuaries, temples, palaces and stunning natural creations. Step into this paradise a natural extravaganza where you witness the country’s rare and breath-taking destinations and lavish amenities in some of the world class accommodations in the most elegant hotels in the country. Do not miss out on Ethiopia’s extreme locations as it takes adventure to the next level.

Erta Ale one of the five global extreme wonders with active bubbling volcano lies at the North-eastern part of Ethiopia famously known as Afar Regional State. It existed since the beginning of the 20th century. The stunner fire sea floor bubblies 2,011-feet revealing a fire shore. The fire mountain is known as “the gateway to hell” due to the active fire floor. It’s the most amazing natural feature in the land of East African Rift Valley. Although there is active volcano bubbling to the top it’s perfectly safe to visit and even take a closer look to the fire lake. The golden sparkling molten rock has an awe-inspiring view especially during the nights. The flow of lava from deep in the ground creating a river of liquid fire is truly an unrivaled view.

Erta Ale presents one of the hottest average temperature on earth topping 34 centigrade each day and climbing to 55 and above centigrade. It’s good to avoid visit from May to August as the place heat might be overwhelming Jumia Travel Destination experts say. On the other months it’s advisable to visit when the sun is down in order to avoid overheating. However, the three hour walk from the nearby village to the top of the volcano is not challenging and allows a close-up view of the magnificent landscape.

The best part of visiting this place does not end there; Afar people are hospitable and traditional. It is their culture to carry rifles and protect their guest who is considered as family from any danger. They are respectful and quite accustomed to hosting visitors treating you as very important person despite your background or where you come from. Everything about the place and the people way of life is so exclusive that it will inspire any seasoned traveller. 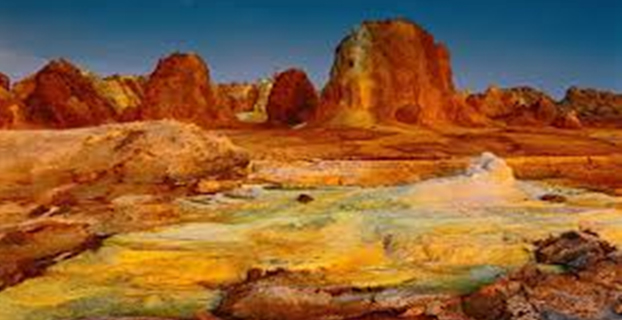 Stay in this region for one more daring adventure at Dallol for a fascinating colourful adventure. It lies over 400 feet below sea level receiving less than 200 millilitres of rainfall annually. The place is one of the hottest place on earth featuring from earthquakes, volcano fountains to colourful salt hills. Dallol crater is one of the lowest known volcanic vents in the world at 45 meter below sea level. The hot springs in Dallol depict bright colours, a palette of ferrous chloride and iron hydroxide emissions forming deep colours.

From the sun above, and bubbling sulphur from the ground below, Dallol the scorching colourful hot town in the Afar Depression holds the record for having the highest average annual temperature ever recorded at 96˚F heating all year around. Dallol is another gorgeous place that has led many by surprise taking visitors to extreme adventure admiring the stunning green, white and brown salt lake.  You can safely visit the hottest paths interacting with locals taking a camel back rides. Visit has to be accompanied by armed guards who are accustomed with the place. There are no places to lodge or dine at the desert hence it’s important to pack bottled water and foods that will last for four days along with sunscreen and hats.

Author: Eden Sahle can be reached at eden.sahle@jumia.com