Preparations are all but finished for the Ethiopian national football team ahead of their trip to Rwanda to take part in the 2016 CHAN tournament that starts in less than a week’s time. The Walias have had ample time to prepare for their second appearance in Africa’s continental showpiece featuring locally based players. We are almost at what is normally the half way point into an Ethiopian Premier League season, but not even ten rounds of action have been played as the Ethiopian football federation has preferred to prioritise national team unity honing at the expense of the local league. In the midst of this, the Walias have hosted the 2015 CECAFA Cup, another chance for Coach Yohannes Sahle to have his charges gel as a team.

Saturday’s Ethiopia versus Niger game came after a report by Kenyan journalist Francis Gaitho that which alleged that the EFF had outright refused offers to play pre tournament friendly matches. Despite the EFF having a long frustrating history of failing to organise key friendlies, this report was proven false when the Niger squad jetted into Addis.

Niger, who qualified for the 2016 CHAN tournament after having defeated Togo in a two leg playoff, arrived on Ethiopian soil for their final warm up match, four months after their last encampment in Addis Ababa. Back in October, they defeated Somalia 2-0 at Addis Ababa Stadium in 2018 World Cup preliminary round action.

Coach Yohannes Sahle’s selection of 23 final squad members is a mix of young up and comers as well as established players, some well past their peaks. The team has been hit with numerous injuries in recent times, as the likes of Dawit Fekadu, Salahdin Bargecho and Tarik Getnet have all been ruled out of the trip to Rwanda.

Ethiopia lined up for yesterday’s clash with a 4-2-3-1 lineup, Abel Mamo, one of the stars of the recently concluded CECAFA Cup retained his place in goal, with Seyoum Tesfaye as captain lining up alongside Yared Baye, Aschalew Tamene and Tekalign Dejene in the backline. Tesfaye Alebachew made his first international appearance since 2011 when he was elected to start before Asrat Megersa in the midfield alongside Gatoch Panom. Last season’s EthPL best player Behailu Assefa was recalled to start parallel to 2015 CECAFA Cup player of the tournament Elias Mamo and Ramkel Lok. Adama City striker and Ethiopian Coffee legend Tafesse Tesfaye, currently leading the EthPL scoring charts with four goals, was the lone man up front earning his first cap in nearly six years. 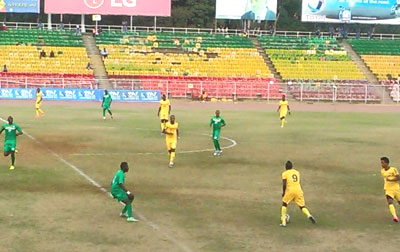 Before a single kick of the ball, a lack of cohesion among the game’s organisers was evident. The two teams came out of the tunnel, lined up in front of the sparsely populated Addis Ababa Stadium, and before the anthems could even be played started shaking hands with their counterparts much to the bemusement of all those present. Just as they were about to break off and take the traditional team picture, they were called back for the anthems. Both teams lined up in anticipation once again, but instead an awkward 30 seconds ensued in which no music was played and officials from the EFF were seen frantically trying to communicate orders before the stadium announcer stated that the national anthem CD was “missing,” to a loud chorus of boos. The teams ran off to their specific sides of the pitch and started warming up. A minute or so later, with no warning, the Ethiopian national anthem started playing but an official quickly signalled to wave the sound down and there would be no comedic third attempt at playing the hymns.

The game finally got under way, with the Ethiopian side appearing to take control of the game, connecting passes but failing to penetrate the Niger final third. The short passing game which has served the Walias very well in recent years failed to immediately trouble Niger. The Menas, who actually reached the quarterfinal stage of the 2011 CHAN tournament, employed the long ball game to decent effect despite having less ball possession than the hosts. On the left flank, Behailu Assefa was stripped of the ball and on the counter attack a complacent Seyoum Tesfaye couldn’t prevent a cross coming in for Idrissa Garba. The 33 year old Nigerian born nationalised Niger striker slammed the ball into the top right corner from within the box leaving Ethiopian goalkeeper Abel Mamo a spectator. Eight minutes in, Niger had taken the lead.

With that goal, Niger appeared to grow in confidence and the Walias appeared increasingly shaky in the midfield. A mixture of zonal marking and increasingly physical play saw Gatoch Panom and Tesfaye Alebachew fail to stamp their authority in the middle of the park, with the latter guilty of some careless giveaways that could have proven fatal. The likes of Ramkel Lok and Behailu Assefa were rendered effectless, further isolating veteran Tafesse Tesfaye up front. Tafesse barely had a noteworthy touch of the ball, and never posed a goal scoring threat of any kind. The Menas meanwhile, were starting to seriously test the referee’s patience after several reckless challenges. One tackle on Ramkel Lok was arguably worthy of a red card, but despite the fan’s insistence, the red remained in the back pocket. Four Niger players were booked in the half.

Minutes before the first half ended, Behailu Assefa took control of a set piece some 20 to 30 yards away from goal, and had his goal bound effort parried into touch by Niger keeper Soumaila. That was Ethiopia’s best scoring chance of the half which ended with no further goals.

After the break, the Walias improved defensively with Niger failing to tread deep into Ethiopian waters, but Ethiopia themselves lacked any real cohesion up front.

Behailu Assefa, partly at fault for the goal was taken off for Tadele Mengesha. Minutes later, an in swinging corner kick from Elias Mamo was met with a solid headed attempt from Gatoch Panom which required the Niger keeper’s full reach to prevent from nestling into the back of the net. It was a sign of things to come as the Menas started to lose their focus, instead directing their energy and eventually their tempers towards the referee.

After a less than favourable showing in the midfield, Tesfaye Alebachew was withdrawn from the game in favour of Dashen Beer’s Asrat Megersa. Asrat was making his first national team appearance since 2014, but immediately exhibited calm and composure that was sorely lacking in the Ethiopian midfield. His experience showed and fans applauded his tenacity.

With about a quarter of an hour to go, Tafesse Tesfaye tried to chase a loose ball but fell to the turf in pain with what appeared to be a hamstring injury. Tafesse, whose national team selection came as a surprise due to his being on the heavier half of his thirties, didn’t enjoy his return to the national team, as he failed to produce any of the moments of inspiration he has been known for throughout his career. He would be withdrawn for Mulualem Tilahun. The seriousness of his injury isn’t clear.

Mulualem meanwhile, proved to be the sparkplug that spared his country’s blushes as he was immediately involved in linkup play with Tadele Mengesha, which led to the Walias finally entering the Niger penalty box in the dying minutes of the match. In the 89th minute of the match, Tadele Mengesha’s in swinging free kick from the flank appeared to have been handled by a Niger defender in the box and a penalty was given. The Niger players harangued the referee, before several took things a bit too far and started shoving opposing players. Just as things looked to be getting out of hand, members of the Niger coaching staff entered the pitch. Any observer would have guessed that they would then attempt to calm their players down, but they themselves engaged in the same feuding, attacking the referee and Ethiopian players half their age. One Niger player was sent off in the fracas.

After an eternity, Gatoch Panom took over matters and calmly stepped up and slotted home his seventh international goal. 1-1, the home crowd was in frenzy. The now ten men demoralized Niger team had to defend for an additional five minutes of extra time. Spurred on by their goal and a now very vocal crowd, the Walias pushed on aiming for the jugular. In the 94th minute, Mulualem Tilahun thought he had won the match, but his point blank range attempt came off the crossbar. Niger managed to clear the ball out to safety and the game ended on that note.

With tempers having flared, blood flowing and a Niger team and coaching staff exhibiting what was a disgraceful display of outright hooliganism, it was no wonder that the visiting team had earned the ire of the home fans. The opposing teams trudged off the pitch without any post match handshakes or greetings. The Menas were booed off and players sarcastically clapped towards the fans while a member of the coaching staff was heard using expletives to describe “these skinny starving Ethiopians.”

Meanwhile, looking at the bigger picture, the Walias have some serious issues up front. Already suffering from a dearth of fire power, relying on the likes of Tafesse Tesfaye for goals against the likes of Congo DR and Angola doesn’t appear to be a smart gamble for the team which failed to score a single goal at the 2014 CHAN tournament. Ethiopia looks much more secure at the back and with the ball in their possession when compared to their showings at the CECAFA Cup. But after yesterday’s performance, fans are left with more reasons to be concerned than anything else. There are too many chinks in the Ethiopian armour, and Coach Yohannes Sahle may have run out of time to mend them ahead of the CHAN trip.

2 thoughts on “Ethiopia 1 Niger 1: Pointers from a less than friendly match in Addis”