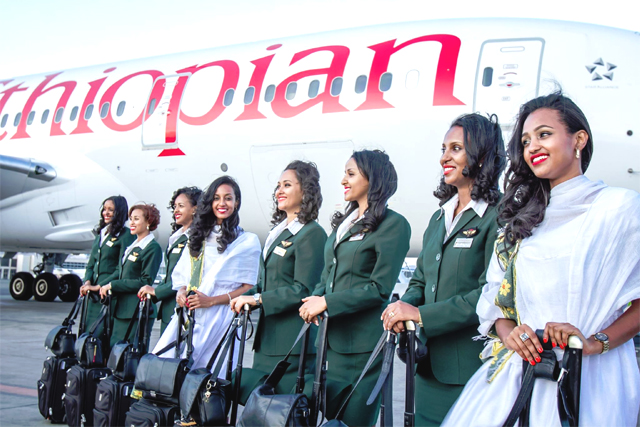 By Meaza Ashenafi, Chairman of the Board of Enat Bank

It has been in the news that Ethiopian Airlines (ET) planned and executed an all women functioned flight on November 19, 2015, on its Addis Abeba – Bangkok route. All aboard that flight took such a historic ride; I wish I was there!

This positive step has thrilled all of us, men and women alike. It is a milestone and a perfect cause for celebration. It symbolizes the possibility of what we have fought for over the past decades.

It is appropriate to salute our sky female leaders, our heroines, for their hard work, courage and dedication to be where they are today. This is a great way of showing us that the tide is starting to turn in favour of women.

Our appreciation to female crew members should be deeper because they manage to do this in addition to their roles as mothers, wives, sisters and daughters; with all their attendant responsibilities. It is easy to imagine the stretched ‘to do list’ in addition to their take off and landing checklist.

By organising this women-centred flight, Ethiopian Airlines has communicated multiple important messages. First and foremost, ET has done an excellent job of acknowledging the indispensable contributions made by its female staff members to the remarkable success story of the company. Women constitute 30pc of all its staff members. Furthermore, I believe such action will inspire, other companies to take innovative steps and see the competitive advantage of proactively training, employing and mobilizing women’s talent.

Although rare, we do find women in aviation history in Ethiopia, in the region and around the globe. There are two known names in Ethiopia: Muluemebet Emiru and Assegedech Assefa.

If we look around the globe we can even find women such as Valentin Tereshkova of Russia, who has flown in space, having been selected from more than 400 applicants and five finalists on June 16, 1963. There are also women flying F16 fighter jets; of course, we do not want to see women participate in war in an ideal world.

Such women are rare and most often they face multiple challenges to continue their occupation.

As rightly pointed out by Tewolde Gebremariam, CEO of Ethiopian Airlines, the only way to assure sustainability is by perusing inclusive development. To achieve this, women need to be on board.

Our country has taken important steps in the legal, policy and institutional arenas to positively impact the economic and social status of girls and women. Progress is made in girls’ education, participation and voice as well as in the area of reproductive health.

However, further and deeper actions are needed to make a meaningful change in the lives of women since it is becoming obvious that cramped roles are bad for women. They also hurt society at large.

The action taken by ET has symbolic value, too. It is a strong signal of the future of Ethiopia and Africa and that the old model of business and occupational segregation based on gender is no longer viable. Gender balance is no more the battle between men and women: it is a 21st Century agenda. It is a battle between the progressives and the rest.

Canada’s Prime Minister, Justin Trudeau, when asked why he has given half the cabinet positions in his administration to women, he answered, “Because it is 2015.” I would say, Ethiopian Airlines is encouraging women to fly literally and figuratively because it is 2015!

Ethiopia Airlines is a dynamic and innovating company and will be a powerful ally for gender equality, sustainability and good governance.

Enat Bank is another success story that is breaking barriers and registering unprecedented success. It is the first private bank that has registered profit in its first year of operations. Most importantly, it is a bank with a woman empowerment agenda, which is a key objective and a goodwill gesture of the bank that has galvanized the public interest.

Enat Bank and Ethiopian Airlines go way back in their relationship. When promoters of the bank were struggling to raise the required capital in 2009/2010, we received advice and encouragement from its top management. We had some allies and ‘partners in crime’ that suggested some key turning point strategies.