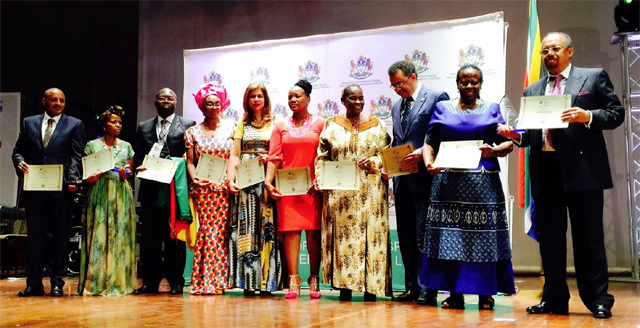 Ethiopian Airlines, the largest, fastest growing and most profitable airline in Africa, is pleased to announce that the Group Chief Executive Officer, Tewolde GebreMariam, won Most Gender Focused CEO Award 2015 from the Leading Women of Africa (LWA) at the continental Championship Men award ceremony held on 3rd December 2015 in Durban-South Africa.

Leading Women of Africa (LWA) is a Pan African Forum that continuously promotes efforts to position women’s economic empowerment at the focal point of the 21st Century goals on sustainable development. The aim is to highlight the contribution of men who have played a significant role in unlocking the potential and the acknowledgment of women as equal partners and to honor them for their influential role in the socio-economic change in Africa through women empowerment.

After receiving the award, Tewolde GebreMariam, Ethiopian Group CEO said, “First and foremost I would like to thank LWA for their dedication in organizing such a distinguished and prestigious award and recognition of men in Africa. I find myself very honored to be receiving such an important Award and I am grateful for this recognition.  It is a well-researched fact that gender diversity in corporate leadership generates better company performance and increases innovation.  Over the past few years, we have strived to implement gender equality and make it an integral part of our company culture.  Ethiopian is striving to be a gender responsive organization and has been an equal opportunity employer for the past 70 years.”

He added, “It was only last November that we marked a historic flight by dispatching an all Women Functioned Flight with a theme “Women Empowerment for a Sustainable Growth” which has been a showcase that we empower our Women Aviation Professionals in every aspect of the aviation field, portraying Ethiopian as gender responsive organization that strives to pursue its underlying stance of being an equal opportunity employer. This recognition is a huge affirmation that we are on the right track.”

Mr. Tewolde has won multiple awards including “The African CEO of the Year-2012”, “The Best African Business Leader of the year 2012”, In July 2013, he became the first African Airline CEO to receive “The Airline Strategy Award for Regional Leadership” in the award’s 12 year history, “Planet Africa professional Excellence Award” in 2013, “2015 – International Grand Prix Special Award”, in September 2015, nominated by United Nations

Secretary-General to be a member in his High-Level Advisory Group on Sustainable Transport, and others.

Ethiopian Airlines (Ethiopian) is the fastest growing Airline in Africa.  In its close to seven decades of operations, Ethiopian has become one of the continent’s leading carriers, unrivalled in efficiency and operational success.

Ethiopian commands the lion share of the pan-African passenger and cargo network operating the youngest and most modern fleet to more than 92 international destinations across five continents. Ethiopian fleet includes ultra-modern and environmentally friendly aircraft such as the Boeing 787, Boeing 777-300ER, Boeing 777-200LR, Boeing 777-200 Freighter, Bombardier Q-400 double cabin with an average fleet age of five years. In fact, Ethiopian is the first airline in Africa to own and operate these aircraft.