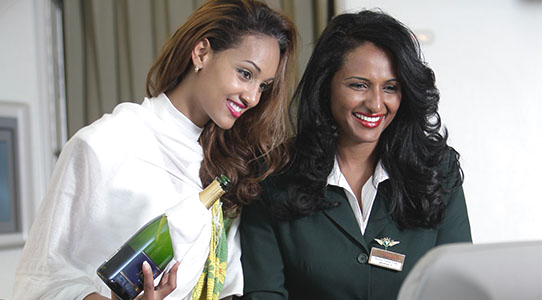 Ethiopian Airlines, the largest, fastest growing and most profitable airline in Africa, is pleased to announce that it has won Employer of Choice 2015 award by Careers in Africa in an event held on Tuesday November 19, 2015  at Sandton Hilton Hotel in South Africa.

Ethiopian was crowned Employer of Choice 2015 in the categories of Local Attractiveness and Aviation, Logistics and Shipping. Winners are identified solely by the data from Careers in Africa Employer of Choice, making it a truly independent selection of those who make an impact that resonates across the global African talent pool.

Ethiopian Group CEO Tewolde Gebremariam remarked, “We are pleased to receive Employer of Choice 2015 award which is a show case that Ethiopian is an Employer of choice. Today Africa is on the rise, inhabiting the newly emerging fastest-growing economies and youngest population which could serve as a spring board to a better future of the region .We pledge to sustain our motto of being an equal opportunity employer there by ensure best use of Africa’s   human capital for the renaissance of our beloved continent. “

Ethiopian is a multi-award winning airline, including the APEX Passenger Choice Award, the most extensive survey of passengers in the industry, CAPA Airline of the Year Award, are few to mention.

Ethiopian is a truly indigenous Pan-African global carrier that operates the youngest and the most modern fleet in the continent with an average aircraft age of less than 5 years with more than 232 daily departures.

Ethiopian Airlines (Ethiopian) is the fastest growing Airline in Africa.  In its close to seven decades of operations, Ethiopian has become one of the continent’s leading carriers, unrivalled in efficiency and operational success.

Ethiopian commands the lion share of the pan-African passenger and cargo network operating the youngest and most modern fleet to more than 90 international destinations across five continents. Ethiopian fleet includes ultra-modern and environmentally friendly aircraft such as the Boeing 787, Boeing 777-300ER, Boeing 777-200LR, Boeing 777-200 Freighter, Bombardier Q-400 double cabin with an average fleet age of five years. In fact, Ethiopian is the first airline in Africa to own and operate these aircraft.