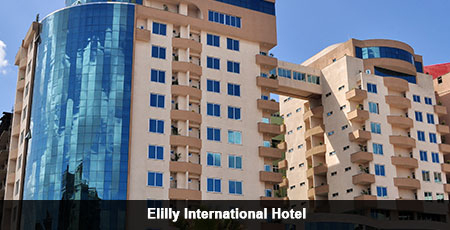 These are five of the 95 hotels which the Ministry of Culture & Tourism (MoCT) had deemed worthy of rating, of the 136 that had registered for evaluation under the hotel grading scheme. So said Gezahegn Abate, director of MoCT International & Public Relations Directorate. The other 28 have not met the basic minimum to be eligible in the process. There were 13 hotels that were not evaluated for various reasons including construction work.

The Ministry announced the rating at a press conference on Saturday August 8, 2015, but withheld the names and ratings of the hotels, stating that they were given time to submit grievances.

While the 38 have received their certificates confirming their standards, 57 hotels are yet to be issued the confirmation certificate, pending submission of mandatory certificates on sanitation and emergency exit by the hotels.

In 2011, the Ministry made the first attempt to grade hotels; the exercise was not concluded as the necessary expertise was not then, available. This year’s successful grading scheme was carried out in collaboration with the United Nations World Tourism Organisation (UNWTO). Six experts from the UNWTO team joined 200 Ethiopian experts in the process of preparing the criteria and actual assessment for the rating. The Association of hotel owners also had an active role in preparing the criteria, which has 12 indicators.

Each of the hotels evaluated was given detailed feedback on the improvements they need to make to go to the next stage of the grading and be evaluated within one year.

The Association which embraces 70 hotels in the city as its members was also part of the evaluation team.

One of the three five-star hotels, Capital Hotel & Spa, which considered itself a five- star even before the grading, was awarded 85.68pc, according to its Marketing Director, Michael Teka.

Michael agreed with the assessment and endorsed the standards, saying that they had been longing for the rating.

“Getting the stars will help us distinguish ourselves from the others and it also enables us to improve based on the comments we were given,” he told Fortune.

One of the ten is Hilton Hotel according to sources.

The Addis Abeba Hotel Owners Association trains its members in online marketing and promotion, and consults them for plans to work on improving the standards of the hotels, upgrading themselves for the next steps, said Biniam.

“We will help the hotels to get experiences and implement the assessment recommendations,” he said.

After the hotels were issued with the evaluation results in sealed envelopes, they were given a five-day period from Monday August 10, 2015 to Friday August 14, to air their grievances. This time was also given to those graded ones to come with the mandatory sanitary and fire escape certificates.

Within this period, 10 hotels have submitted their grievances to the Ministry, while eight have presented the certificates required to claim their stars, according to Ministry representative, Gezahegn.

“We will present the complaints to the team from the UNWTO and another team other than the one that did the evaluation will come and verify the complaints,” Gezahegn told Fortune.

The Ministry expects the re-evaluation of the hotels that complained within two weeks and it will announce the resulting re-grading and the names of the hotels graded in each category.