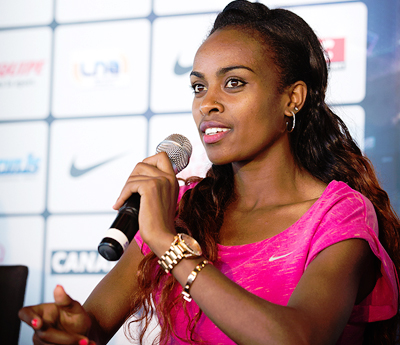 …..  Genzebe Dibaba is another athlete who feels capable of breaking a world record.

The Ethiopian has set numerous world records indoors, but now she wants to do the same outdoors. She came close to the 5000m mark in Paris, clocking 14:15.41. And after running an African record of 3:54.11 in Barcelona, she feels she can get closer to the world 1500m record of 3:50.46 on Friday in Monaco.

“Last week I ran 3:54 and it felt comfortable,” said the two-time world indoor champion. “Tomorrow I’m looking to run faster. I don’t know how much faster, but I’m going to go for it.

“I was very happy but I wasn’t surprised,” she added of her performance in Barcelona. “My coach knew that I was ready to run that fast.

“This year we’ve changed things and have done more intense training for the outdoor season. Now I think I can run faster outdoors than I previously thought I was capable of.

“I have totally changed my training. I already have natural speed which I don’t need to work on, so in training I’ve been working more on my endurance. I wanted to train more for the outdoor season than the indoor season.”

Dibaba is now undefeated this year and will head to the World Championships in Beijing as a gold medal favourite in whichever event she decides to contest. She may even double up.

“I haven’t yet made a final decision about whether to double up in Beijing,” she said. “I’ll speak to my coach after the race tomorrow and then we’ll decide what to do. If I had to pick one event, I would focus on the 5000m. My preparation has been geared more for that event, so physically and mentally I’m ready to run that event.”