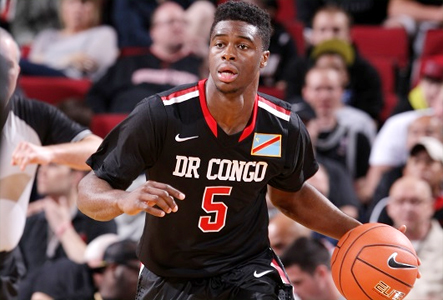 The 19-year-old point guard, who signed with the Southern Methodist University but opted to play professional in China this past season, has been invited for a second workout with the Los Angeles Lakers, and is part of the 19-player list who will sit in the green room during the draft ceremony.

This year’s draft will be held on Thursday, 25 June at the Barclays Centre in Brooklyn, New York.

If Mudiay is selected by the Orlando Magic as observers suggest, he could line-up along Nigerian-American Victor Oladipo, forming an electrifying backcourt.

The 6-feet-6 guard Mudiay, who is often compared to Oklahoma City Thunder Russell Westbrook given his athleticism and ball handling, averaged 22.9 points, 7.9 rebounds and 7.5 assists in the Chinese league although he has played only 12 games due to an ankle injury.

In meantime, former Duke University standout Jahlil Okafor who is Nigerian descent, is tipped for No 1 pick in the 2015 NBA draft.

One thought on “Emmanuel Mudiay eyeing his NBA draft chances”