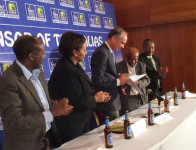 The deal, which took place at the Addis Hilton, was signed by Johan Doyer, Heineken Ethiopia managing director and Tekle Woyni Assefa, Vice-President of the EFF.

Walia Beer, which recently entered the Ethiopian beverage market, has received rave review and has gained popularity among many Ethiopians.

As per the agreement, Heineken will provide EFF 14 million birr a year.

The deal does not include the Ethiopian women national soccer team known as “Dinkinesh” (Lucy), which the EFF said that it has already found another sponsor for.

The Walias’ last sponsor was Bedele Beer, another Heineken product. Bedele paid 24 million birr for a 2-year contract then.