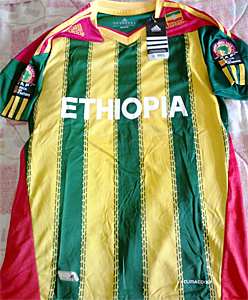 This part of Merkato is known as a market place for various types of clothing. But, as the country’s  national team, The Walias  named after the Walia Ibex is to face its Nigerian counterpart, the Super Eagles, today, October 13, 2013, the market is flooded with jerseys. Enthusiastic fans are on a shopping spree for one of the biggest matches of the year, which has a bearing on whether the team will qualify for the 2014 World Cup in Brazil. Getachew Assefa, 30, was one of the fans contacted by Fortune. On Wednesday, he was negotiating for a jersey. The vendor, Almeyahu Esmelealem, insisted on 115 Br, in what sounded like a heated negotiation. Getachew finally purchased the jersey for 90 Br, which he attributed to his upbringing in Merkato. “He could not take advantage of me, however much he tried, he said. The vendor, Alemayehu, for his part, told Fortune that the price at which he wanted to sell the short sleeved jersey was not exaggerated and that he received it  for 80 Br from wholesellers.

“We receive high quality jerseys for 120 Br and also there are jerseys starting from 60 Br, depending on the textile quality, says Alemayehu. Many of the vendors contacted by Fortune said that the source of the jerseys is Merkato. They then sell the jerseys across different parts of the city with varying prices. For example, Abushu Tedla on the evening of Friday, October 11, 2013, around the national stadium, sold long-sleeved jerseys for 180 Br. This is a 50 Br increase from the price at Merkato. Most of the jerseys in the vendors hands are short-sleeved. However, those with long sleeves were also available. Additionally, jerseys in full colour, green and yellow, as opposed to the striped variety, could be purchased too. The price differs depending on the textile quality, design and whether or not it bears the mark of the Ethiopian Football Federation. Jerseys with players names are worth a lot more than others,Â says Alemayehu. In previous games, the price of a jersey was not so expensive. They were available on the market for prices ranging between 60 Br and 120 Br. The price increment came due to the improvement of the national team’s performance for consecutive matches, according to many vendors and buyers contacted by Fortune. In addition to the hot market for jerseys, headscarves and wristbands with the national colours were also hot items. The number of jersey vendors on the street is also rising as the day of the match approaches. The return is good. Although some vendors claimed that they were making as little as 10 Br profit on a jersey, many were actually buying the jerseys for around 60 Br from wholesalers in Merkato and selling them for upwards of 100 Br; even sometimes as much as 190 Br. An employee in a Merkato store, Ayeu Redi, said that his store had sold half of the 2,000 procured from importers by Wednesday. One type of jersey was selling for 120 Br. The store sells 250 jerseys a day. In the 10 minutes or so that Fortune spent talking to Ayeu, eight people had come to ask for prices and two had made purchases. Orders will be given to Chinese companies with samples and then they deliver the ordered number and we import them,Â says Hayatu Berka, who imports jerseys. “We have imported about 10,000 jerseys from China.Â The price of jerseys at Hayatu’s store is cheap compared to others, with the minimum price being 50 Br and the maximum 120 Br. Based on international experiences, national teams and clubs use the sale of jerseys as a means of income.

The Ethiopian Football Federation (EFF) cautions that people and companies trading the jersey did not ask for permission. “We proposed the idea of preparing and selling the jerseys  during the African Cup of Nations held in South Africa, in collaboration with the Ethiopian Embassy there,says Samson Geatchew, marketing and communications manager at the Federation. Ã¢â‚¬Å“But the idea was rejected by higher officials in the Federation and was then forgotten.Â According to Samson, the Federation, in collaboration with the Federation of International Foot Ball Association (FIFA), is attempting to protect its brand ownership on the jersey. The Marketing and Communications Department recently conducted a study and discovered that there are at least 15, 000 potential jersey buyers, and suggested to make the jersey available to the market for 75 Br. But the proposal did not receive a green light from the leadership,Â Samson said. Almost all the jerseys in the market are made in China, although they all bear the colours of the national team and the flag. The only factory with the facility to make jerseys, according to Fassil Tadesse, CEO of Kebire Enterprise and president of the Ethiopian Textile & Garment Manufacturers Association, is the Ayka Addis Textile Factory.

The type of fabric predominantly used to make the jerseys is Polyester, says Fassil. Only three textile factories are producing it, he told Fortune. The Kebire Enterprise is in the process of procuring a printing facility, even if it is not specifically for jersey production. If you have a printing facility in the textile sector, you will be able to add 30pc on to the value, he told Fortune. The jersey importer, Hayatu, says he would have cooperated with the Federation had the latter’s idea of availing the jerseys come to fruition.