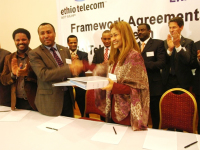 Addis Ababa –  Ethio Telecom yesterday signed a framework agreement with Ericsson, the Swedish telecom group, to enhancing the performance and capacity of 2G and 3G networks.

The project is part of the1.6 million USD expansion project awarded for Huawei and ZTE last year, and is expected to be finalized within six months.

Ethio Telecom has signed contract agreement with Huawei Technologies Co. and ZTE Corp. in 2013 to expand access to telecom services and add more modern features in to the service.

Four of the 6 telecom circles, in Southern part of the country, which were awarded to ZTE by the previous agreement are provided for Ericson because of a row over terms with ZTE, said Andualem Admase CEO of Ethio Telecom during the signing ceremony.

The 1.6 million USD project aims to ensure universal telecom services that sustain the security of the network system in the country and realize the target set regarding increasing mobile subscribers to 59 million at end of the growth and transformation plan period, means this fiscal year, he added.

As per the agreement, Ericsson will provide Ethio Telecom with its 2G/3G mobile communication related products and services such as planning, tuning, designing, optimization and deployment.

It will augment the network coverage quality and mobile communication services especially to southern Ethiopia subscribers.

Ethio Telecom signed the expansion agreement with Huwai and ZTE in 2013 to expand the service thereby increase the mobile subscribers, and to offer 4G mobile technology in the capital Addis Ababa and 3G services to subscribers around the country.

The project is expected to increase telecom services coverage of the country to 85 percent.

The project includes network and information system services other than the much hyped mobile expansion, which is hoped to ease the mobile network failures in the capital Addis Ababa and throughout the country. –