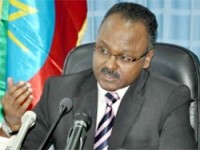 Dr. Abraham stated that the country has registered a rapid and stable macroeconomic growth in that it has managed to increase per capita income to 632 US dollars from 558 US dollars in 2005 Ethiopian fiscal year, and inflation remained in single digit.

According to the State Minister, the economic growth was fair and has improved the provision of social services and alleviated millions out of poverty.

He said the country also showed some economic transformation from agriculture to industry in that while the share of agriculture in the national economy decreased from 42 percent in 2005 EFY to 40 percent in 2006, industry grew to 14 percent from 13 percent. The service sector reached 46 percent from 45 percent during the stated period.

The EFY 2006 was the 11th consecutive year in which Ethiopia’s economy grew on average by 10.9 percent, and agriculture, industry and service registered 9, 13.8 and 12.2 annual growth, Dr. Abraham added.

The low performance of exports in the economy, especially in the manufacturing sector, was a challenge to the country during the period.