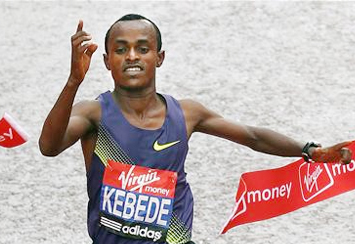 Three men and three women are in contention for the $500,000 USD winner-take-all prize that will be awarded to the top male and female finisher in the World Marathon Majors (WMM) 2013-2014 scoring period, which concludes on Sunday, November 2 in New York City.

The 2013-14 WMM series continues at the BMW BERLIN-MARATHON on September 28, the BANK OF AMERICA CHICAGO MARATHON on October 12, and will conclude at the TCS NEW YORK CITY MARATHON on November 2. Points are at stake in each race as the chase for the grand prize intensifies.

Current men’s leader and defending champion Tsegaye Kebede (Ethiopia) and 3rd place Dennis Kimetto (Kenya), will compete at the BMW BERLIN-MARATHON on September 28, and both athletes will be looking for the win to take their points total to 75.

While a win for either athlete is no forgone conclusion, should one of them cross the line first, then current series second place Wilson Kipsang would need to win in the final race in New York to finish on 76 points and become the reigning WMM men’s champion.

On the women’s side, Rita Jeptoo (Kenya) can secure the WMM victory with a win at the BANK OF AMERICA CHICAGO MARATHON on October 12 and take her points total to a maximum 100, the first athlete in the history of the competition to score the maximum points available. Even second place on the flat Chicago course will make her points total almost unbeatable with her average winning time currently faster than that of 2nd place Edna Kiplagat.

However, if she fails to finish in the first five, the title race opens up to include Kenya’s Priscah Jeptoo, who is running head to head in TCS New York City against Edna Kiplagat.

Edna Kiplagat, the double World Champion, is currently only 10 points behind Rita Jeptoo and will be watching the Chicago race with anticipation.
2013-2014 Men’s Leaderboard (as of September 13, 2014)

Note: Kebede has already scored in four 2013-14 events, with a lowest finish of fourth (5 points) at the 2013 World Championships.

Points available at each race:

In the event of a tie, the winner shall be determined using the following tie-breaker:

1.     The athlete with the best head-to-head record during the period (including all qualifying races in the period, not just scoring races) will be declared the winner. Only the fact that one athlete finished ahead of the other will be taken into account and not by how many places.

If there is still a tie, the following tie-breakers will be used in descending order until the tie is broken:

2.     The athlete who has achieved his or her points in the fewest races.

3.     The athlete who won the most Qualifying Races during the period.

4.     The athlete with the fastest average time in his or her scoring races.

If an athlete starts a race but for any reason does not complete it, he or she will, for the purposes of tie-breakers 1 and 2 above, be treated as having taken part in the event.

Established in 2006, World Marathon Majors (WMM) is a race series comprised of the Tokyo, Boston, Virgin Money London, BMW BERLIN, Bank of America Chicago, and TCS New York City Marathons. In the years in which they are run, WMM also includes the IAAF World Championships and Olympic marathons. At the conclusion of each two-year cycle, WMM offers a $1 million prize purse to be divided equally between the top male and female marathoners in the world. The inaugural 2006-2007 Series was launched at the 110th Boston Marathon on April 17, 2006, and concluded at the New York City Marathon on November 4, 2007. The 2013-2014 series, the WMM’s eighth two-year series, began with the Tokyo Marathon on February 24, 2013 and will conclude at the TCS New York City Marathon on November 2, 2014.