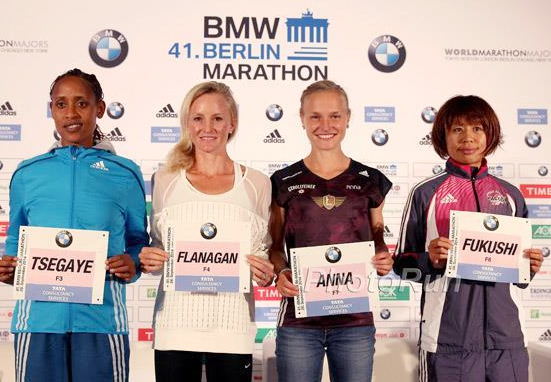 The Ethiopian duo of Tirfi Tsegaye and Feyse Tadesse together with the USA’s Shalane Flanagan aim to become part of an exclusive distance running club at the 41st edition of the BMW Berlin Marathon, an IAAF Gold Label Road Race, on Sunday (28).

The trio aim to go under 2:20 for the marathon, a landmark achieved by 18 women so far in history.

Five have that done so in Berlin with Kenya’s Florence Kiplagat the last to succeed in that attempt with her time of 2:19:44 in 2011. The German capital’s women’s course record of 2:19:12 has remained in the possession of Japan’s 2004 Olympic Marathon champion Mizuki Noguchi since 2005.

Tsegaye lives in Addis Ababa but hails from Oromia, one of the most fertile sources of Ethiopia running talent, including Kenenise Bekele. The winner of the Paris title two years ago, Dubai last year and Tokyo this February is very much aware of that heritage.

“I’m proud to come from Oromia and to have grown up in the capital of Arsi. I know all about our running tradition and want to represent that here on the streets of Berlin,” she said on Thursday at the women’s press conference.

To that effect she and training partner but rival on Sunday Feyse Tadese will be aiming to join the three Ethiopian women who are already members of the sub-2:20 club, headed by the 2012 Olympic champion Tiki Gelana with her 2:18:58.

Feyse Tadese will be the fastest woman in the field, thanks to her 2:21:06 time when winning in Paris last year.

Tsegaye and Tadese will leave friendship behind once on the start line, but, according to the former, the subject was never raised in their Addis training base.

“We never discussed who might be strongest. Training is about helping each other, then comes the race on Sunday. I know my preparation has gone well and I feel I have a strong chance on improving my best of 2:21:19 when I finished second in Berlin two years ago,” added Tsegaye.