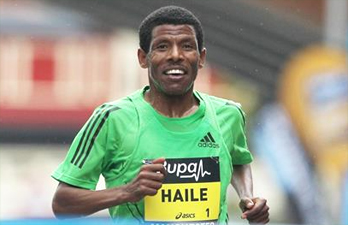 Haile Gebrselassie has accomplished most things during his reign as the king of distance running, but the Ethiopian will be breaking new ground when he lines up in the 25th Bupa Great South Run, an IAAF Gold Label Road Race, on 26 October.

“I love competing in the Bupa Great Run series,” said the 41-year-old, who will be making his debut in the Portsmouth race. “I have run in the Great Run races in Newcastle, Manchester, Glasgow, Australia and Ethiopia and I have won them all too.

“It will be great to add the Bupa Great South Run in Portsmouth to the list. It will be a new experience for me at the age of 41.”

The flat, fast ten mile course has attracted some of the world’s best runners in the past – Mo Farah, Paula Radcliffe, Sonia O’Sullivan, Liz McColgan and Jo Pavey among them – and the distance ought to be perfectly suited to Gebrselassie, who has broken an incredible 27 world records at distances ranging from two miles to the marathon.