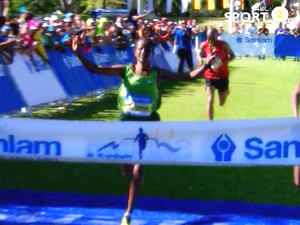 After Kenyan-born Qatari athlete Nicholas Kemboi had done most of the hard work, pushing the pace up front in the first half, Kibor broke away to win comfortably in 2:10:45.

With Kemboi dropping back to finish sixth, another Kenyan, Henry Chirchir, was the best of the rest, crossing the line in 2:12:39, while Josphat Kamzee, Kibor’s training partner, was third in 2:13:05.

“I expected to win the race but it was quite challenging and I struggled from 27km,” said Kamzee, one of the pre-race favourites.

Meanwhile, Ethiopian athlete Meseret Biru won the women’s race in 2:31:00 ahead of compatriot Goitetom Tesema, who was 59 seconds off the pace, with Kenyan Beatrice Jepkemboi taking third place in 2:33:20.

“I’m very happy to have won this race,” said Biru, speaking through a translator.

“It was easier than I expected, not too fast, because I had planned to go through halfway in 1:11:00 but the wind was strong so I sat with the group.”