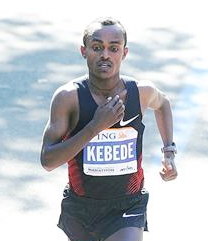 Ethiopiaâ€™s Tsegaye Kebede and Kenyaâ€™s Dennis Kimetto will be on the start line of the 2014 BMW Berlin Marathon on 28 September, the race organisers of theÂ IAAF Gold Label Road RaceÂ announced on Tuesday.

Kebede, 27, is one of the most consistently successful marathon runners ever.

He has finished 17 marathons, in which he won six and placed second three times, followed by five third-place finishes which included bronze medals in the 2008 Olympic Games and 2009 IAAF World Championships marathons.

His personal best of 2:04:38 was achieved when winning the 2012 Bank of America Chicago Marathon.