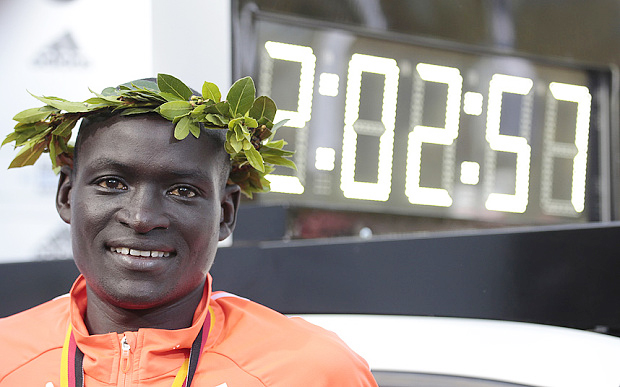 Just a few years ago, Dennis Kimetto was working on his family’s farm in Kenya’s Rift Valley highlands, growing potatoes, maize and taking care of livestock.

He would watch from the fields as groups of runners sped by in their pursuit of international stardom, before an opening with a local training group set him on a course that on Sunday saw him smash the marathon world record and become the first man to break the 2hrs 03min barrier.

“I used to watch a lot of athletics on television, I was inspired,” he told AFP, hours after returning home from Berlin to a hero’s welcome.

Family hardship meant Kimetto had to drop out of school at 14 to help on the farm and at the local market, but he eventually struck up a conversation with Geoffrey Mutai – already one of the world’s fastest road racers.

“I was invited to join the athletics training camp at Kapngetuny, which is only a few kilometres from my home,” the quietly-spoken 30-year-old recalled. Through running with Mutai’s group he gained access to running kit and shoes, which cost a small fortune in Kenya, and an overseas manager and agent.

Long-inspired by Ethiopian Haile Gebrselassie and Kenyan Paul Tergat’s epic 10 000m duel at the 2000 Sydney Olympics, Kimetto threw himself into the group training regimen that – when coupled with their unique physiology – puts Kenya’s runners on a level above the rest.

His first major win came in Nairobi’s Half Marathon in 2011, and he went on to finish second behind mentor Mutai in the Berlin Marathon in 2012 – his 2:04.16 was the fastest debut in history.

Kimetto’s performance was also notable because he represented a new breed of Kenyan road racers – who one coach has described as “turbo diesels” – who have no track pedigree, modest top-end speed yet have the speed endurance to excel on the roads.

On Sunday, on the fast-and-flat Berlin course, he raised the bar even higher, taking 26 seconds off the marathon world record of his neighbour and training partner Wilson Kipsang.

His 2:02.57 also made him the first man to break the 2:03 barrier, and has again prompted fresh debate over whether a sub-2 hour marathon may one day be possible.

“I didn’t expect to run a new world record when we started the race. But at the 21km mark I realised it was possible and we urged the pacemakers to increase the pace,” he said.

“It was a matter of endurance under much internal pain. It was physically painful, and we have to push hard to persevere, or ‘kuvumilia’ as we say in Swahili. But when I heard the crowd cheering me on I was able to keep pushing myself.”

His winnings, he said, will be ploughed back into school and college fees for young family members, and support for his community and training group – all keeping with the runners’ tradition of ‘Harambee’, or pulling together.

Kimetto only smiled when asked about breaking the two-hour barrier, but said he thinks he can still go faster.